I am not sure if it was an average of the five-plus hours of sleep in the last three days or maybe the humidity or even poor nutrition (although I have been eating pretty decent lately!), but I really wanted to give up and quit running when I hit mile three of my five-mile planned run this morning. It was just not a good run.

I was tired and sluggish, that is definitely a fact. And my body just felt heavy and off and I had what I like to call either cement legs or elephant legs. They just didn’t want to move or just wanted to move super slow. I had to will them with everything I had to keep moving forward. It wasn’t painful. I wasn’t in pain, I just felt blah.

Sleep, truly, is something elusive to me lately. Menopause – yes, I said menopause! – has hit me hard and almost every single night I wake up anywhere between 2 and 3 a.m. with the hottest of hot flash night sweats. This whole menopause thing with its hot flashes, night sweats, mood swings and everything else it comes with it is for the birds. I welcome any suggestions for handling menopause. And yes, I do take stuff for it. Currently, I am on Paxil and I was taking black cohosh (for several months), but it wasn’t doing anything. I quit taking it. Instead, I started taking Estroven, the sleep cool and calm one. And to help me sleep, I have been using lavender oil in my diffuser.

The picture below is from this week. But most weeks look the same. Most often, I have been actually going to bed, as in our actual bedroom instead of falling asleep on the couch. But sometimes, I fall asleep easier to the noise of the television instead of the hundreds of thoughts running through my brain.

As I was chugging along this morning, as I hit mile three, I thought about quitting. I wanted to just stop. I wanted to be back in my bed sleeping to be real truthful. I was still two miles from home and knew that I couldn’t call the hubby because he was still sleeping. I knew I had to get home whether running or walking. I told myself just to run to mile four and then I could stop and walk the last mile in.

I will admit, I did take a break and just stood still for a minute when I reached that four-mile mark. I took a drink of my Scratch hydration drink I had with me, tried to catch my breath (the air was SOOOO thick), had another talk with myself, (not out loud!) and then decided to run to four and a half miles. Thinking I could walk the last half mile.

I was struggling hard with myself at this point. I really wanted to keep running – in both my heart and head – but my body just didn’t want to cooperate. As I was getting closer to home, my body felt like it was in slow motion. I did take another break, this time, walking for about a block. I had just a half mile left and that is when I dug in, told myself to buck up and just finish. Just do it and get it over with.

When I hit that five mile mark, I was so happy to be done. I was feeling pretty crappy because of how crappy the run went. My stomach was even a little wonky. My last few runs have been pretty good – for me, that is. I am not a track star by any means, but my runs have felt so much better lately. I felt like I was getting my stride back and getting back into the groove. And then today happen.

I expected my splits to be horrible, meaning I expected my last mile to be much, much slower than the first. It was slower, but not I expected it to be worse. It honestly felt like I was doing a 13:00-14:00/mi pace but I actually kept it under 12:00/mi. 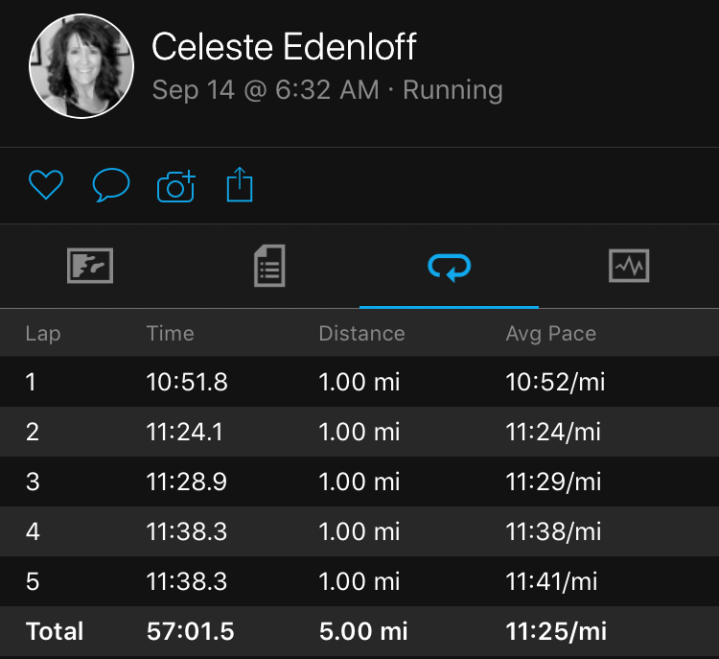 While I was walking back – I had less than five blocks before I reached home – I was really kind of pissy about my run. But, as the day wore on and I had time to think about it. I realized that it wasn’t as bad as I thought, AND…I didn’t give up. As much as I wanted to throw in the towel at mile three, I didn’t. Yes, I took a couple of breaks, but I did run the five-miler like I had originally planned.

I know I am not going to have great runs all the time and that is okay. We can build off of the not-so-good ones and learn from them. I love running and hopefully always will. And, I guess I will take the good with the bad AND the great. 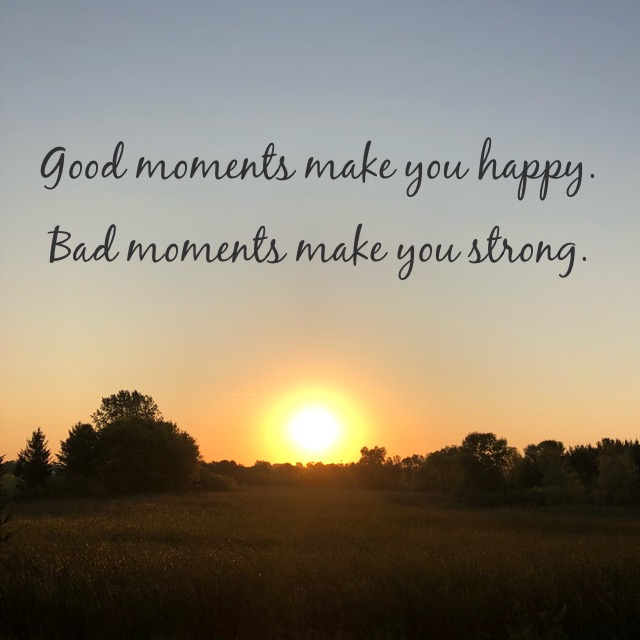 If you care to read more about my running journey, check out the column I wrote in today’s Echo Press. I wrote about how I started running and the milestone we are about to hit. Take a look and let me know your thoughts. Click HERE to read the story.