Hey everyone, it’s me, Celeste, who used to blog at Confessions of a [former] Fat Girl. Don’t worry, that blog is still there. I just decided to start a new blog because…well, because I just felt I wanted a new, fresh start I guess. The look of the blog is still a work in progress. Over the next fews weeks, you may see the look of it changing. Sometimes, it take me a bit to settle on something. Plus, I am not the best graphic design person and I am too cheap to pay someone to do it for me!

Anyway, hope you enjoy it as much as you did my Confessions blog.

This blog won’t be so much about my weight loss journey anymore, like the other was or was supposed to be. It will have some content that deals with my healthy living journey, but it won’t be focused on it.

This blog is basically about my life…the ups, the downs, the highs, the lows and the everything in betweens. My goal is to blog at least once a week. Hopefully on Sundays as that is usually my down day and the least busiest.

I don’t necessarily have a plan for what I am going to write about, but I hope you all find it interesting.

It was a whirlwind of a weekend.

On Friday afternoon, we had an employee team-building event at Luther Crest in Alexandria. For those of you who don’t know, I am a newspaper reporter at the Echo Press in Alexandria, MN. It was awesome! It was so fun to get out of the office with my co-workers, having fun, laughing and just enjoying each other’s company.

I am hoping we get to do something like this again.

As soon as we got done with the event, Al (my husband) and I scrambled home to pack and hit the road. We were heading down to the Rockford/Buffalo area to run in the Rockford River Run 10K, which was set for Saturday morning. We wanted to get to Rockford before 8 p.m. so that we could pick up our race packets on Friday instead of Saturday morning.

We also had to get a few things ready before we left house because Al and I were planning on having our Caribbean Day date day/night on Saturday. Al and I have been doing Caribbean Day since 2011 and it is one of the highlights of our summer.

Well, we made it down to pick up our packets and then we found a restaurant to get spaghetti, which is what we typically eat the night before a race. Al and I made our way to Buck’s, which is a take-out pizza and pasta place. After getting our to-go order, we headed to the hotel and finally got to eat. It was about 8:30 p.m. when we finally sat down at the table in our hotel room. The spaghetti was actually better than expected and the garlic toast was pretty dang good, too.

After unpacking and getting all our race gear ready, it was finally time to hit the hay. I think we were both sleeping by 10:30 p.m., which is actually quite early for us. I was stoked!

My alarm went off at 6:15 a.m. and I immediately shot of out of bed because Al’s alarm was supposed to go off about 15 minutes later. After our race morning rituals, we were out the door and on our way to the race. We got there in plenty of time. I didn’t necessarily set a goal, although I knew I wanted to get back before they started the awards, which was set for 9:15 a.m. The race started at 8 a.m.

As we took off on the rolling hills course (yes, it really was full of rolling hills!), I felt pretty dang good. I did realize, however, around mile 3, that I probably started off a little too fast. But, I just kept trucking along. When I realized that I could probably come in around an hour and 10 minutes, I tried to push it a little bit. Then, because things were going pretty well – despite the hills, humidity and low air quality from fires in California and Canada – I figured I could actually finish in probably an hour and eight minutes. So, I decided to go for it.

When setting a goal like that, I will keep repeating over and over again, one oh eight, one oh eight, one oh eight, meaning an hour and eight minutes. As I crossed the finished the line and looked down at my watch, I actually saw 1:07 something. I was STOKED. And then when I looked up my times from previous 10K races from this year, I was even more stoked. I shaved seven minutes off my time from the Shamrock Shuffle in March. My time at that race was 1:14:50.

My guess as to why I shaved that many minutes off? 1. I feel like my asthma is finally under control. 2. I am exercising and running on a regular basis. And 3. My head is finally in the game. If you are new to my blog, last year was an extremely rough year as I lost both my parents. My mom died March 11 from Dementia and my dad died July 3 from Alzheimer’s. It was beyond horrible and I was in a deep, deep dark hole for awhile.

But, I am happy to say I am in the process of climbing my way out and I feel so much better. Don’t get me wrong, I still have some extraordinarly hard days, but they are fewer and far between now.

Our goal was to make it back to Alexandria by 2 p.m. so we could start our Caribbean date. We made it back by 1:35 p.m. and things quickly got underway. We bought a new blow-up pool and using our air compressor quickly got it blown up and then filled with water. We also got a couple of air mattresses and a beach ball just for fun. The tiki torches were also put in place and I started making our drinks – Blackberry-Mint Moscow Mules. Click here for the recipe, it came from Good Housekeeping.

Yes, we did put umbrellas in our drinks.

After the drinks were poured and the chips and salsa were brought out, it was time to sit back, relax and just enjoy each other’s company. It was seriously, the most perfect day. 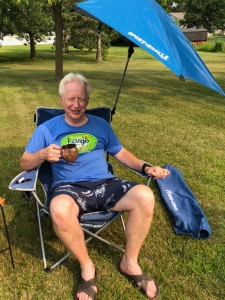 Side note, as I posted yesterday on my Instagram and SnapChat accounts, the picture of me in the swimsuit is kind of a big deal. I have some huge body image issues (I will write on that in an upcoming blog) but I wanted to document the day and if it included me in a suit, well then be it. I am working on those issues…one tiny step at a time!

Our Caribbean Day ended with us taking a late-night walk because we stuffed ourselves silly on the awesome steak and chicken kabobs and grilled peaches, peppers and pineapple. The meal, of course, was beyond delicious!

So, there you have it. My first blog post on my new blog, Newspaper Girl on the Run.

I hope you enjoyed it as much as I enjoyed writing it. I look forward to posting more next week! 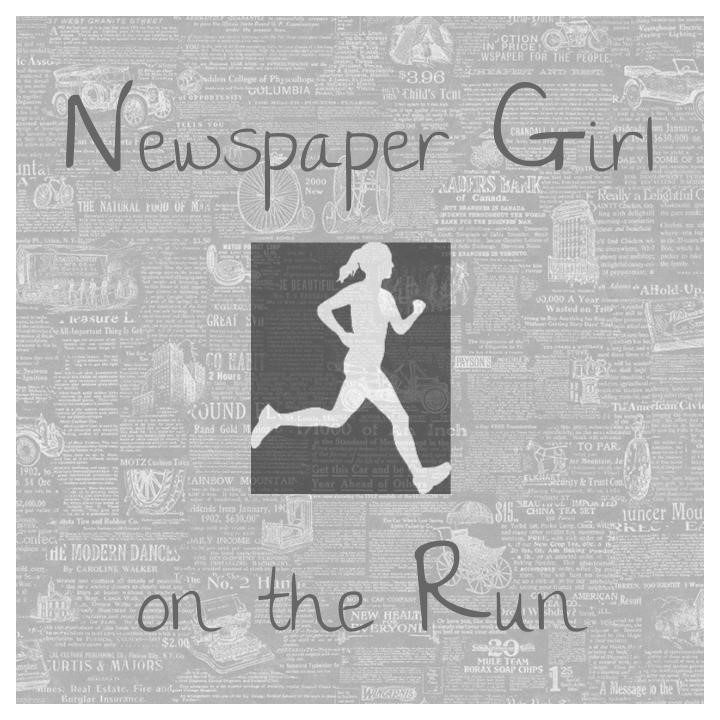