As we got to the starting line, I saw there were pacers. I like running with a pacer and don’t remember seeing pacers at this particular race before. My husband, Al, and I were running the Stillwater Log Run 10-mile race. This was our third time at this race. It’s a favorite. 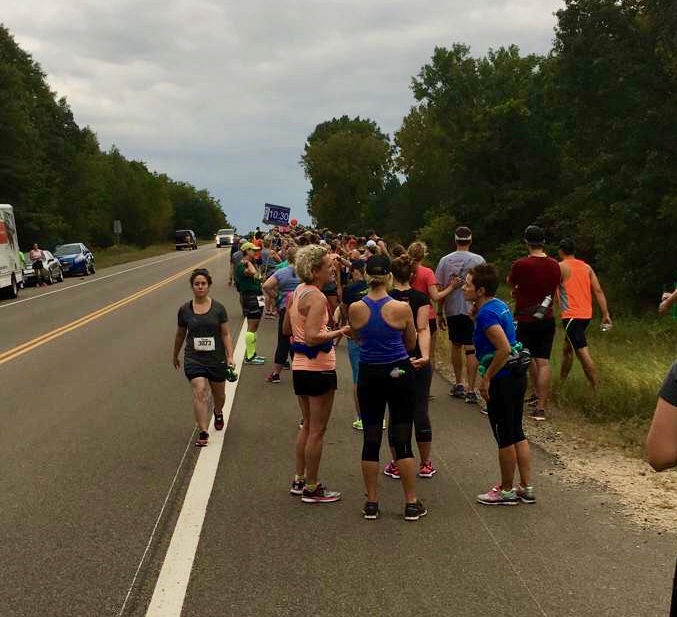 PICTURE: At the starting line.

My immediate thought was, “Yes, pacers!” And then I thought, “Crap, there won’t be one slow enough.”

Excuses. Really, that’s what they were. Maybe legitimate, but nonetheless, excuses. I walked away. I looked at what my last few runs had been and most were closer to that 12:00 minute per mile pace. So, yep, the 11:00 was not going to happen.

As the time to start the race drew near, Al and I gave each other a quick kiss and he headed up toward the front of the line. I stayed behind the 11:00 minute per mile pacer.

Thoughts. Lots of thoughts ran through my head. I wondered if I could maybe, just maybe do it. I knew I hadn’t been feeling well. I had had a sore throat all week. I hadn’t got a lot of sleep, but then again, what’s new on that front. But I still thought maybe. Just maybe.

Up. The. HILL…….Trust the pacer. Slowly, we climbed. I stayed right behind her. Probably too close at times that she could probably feel my heavy breathing on her neck. Well, okay, maybe not that close, but then again……

Finally, we leveled off and it was close to mile one. I felt good. I wanted to go faster. I felt slow. Those three words kept rolling around in my head. Over and over and over again.

Mile two. Getting a little harder to keep up, but not bad. There may have been another down hill where I wanted to fly, but I didn’t. “Reserve your energy,” was what I told myself. And of course, trust the pacer.

Mile three. BIG HILL. Still doing okay. Still keeping pace. For the most part. Still repeating to trust the damn pacer. Push yourself. You got this. You can do it. Just put your trust in the pacer. Don’t give up.

Mile four, ahh, must better. Done with the damn hills. Let’s do this. Trust…..The…..Pacer.

She’s getting a little further ahead, but that’s okay. And then…..another hill. And it feels like she is SLOWLY pulling out in front. Yep, she is. She’s getting further and further ahead. But, TRUST……..THE…….PACER. Try and keep up. Push yourself.

Mile six. DAMN IT……I. can’t. keep. up. I have to walk. I can’t do this. My body is giving out. But. TRUST. The………nope, she’s gone. Damn hills. Can’t see her anymore. Screw this. I am done. This is stupid. Who cares. Why the hell did I think I could keep up that pace. Stupid pacer. YES, these were the thoughts running through my head. I was annoyed. I was mad at my body. I was tired. I. WANTED TO QUIT. 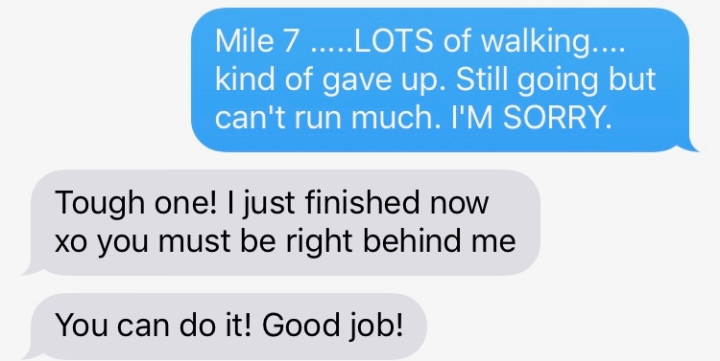 The blue is my text to Al. The gray is his response back. LOL! He thought I was right behind him. Bless his soul.

I completely, utterly gave up. I didn’t care about the stupid race. I was done.

I tried to reason with myself. Just run to the next cone, the next mailbox, the next driveway, the next tree, the next whatever it was. But, I truly had given up. I truly didn’t care that I was walking. And then…….

I tried to think of things that would make be buck up, put my big girl panties on and just finish the race with my head held high and just do it. Just keep running. I thought of my friend, Chris, and her son, Evan, who just walked 150 miles in nine days. 150 FRIGGIN’ MILES. And seriously, here I was being a big ol’ baby.

I thought of a group of ladies who I am writing a story about who will be doing a 15 day trek to Mount Everest. The one lady’s son has Duchenne’s, a form of muscular dystrophy. Her son will be probably die by the time he is 30. And here I am bitching and moaning about running a measly 10 miles.

I thought of Carla, a wonderful young lady with two beautiful boys, who is fighting cancer. I wrote about her awhile back and I stay up-to-date with her progress on Facebook. And I thought of the young man, Joshua, who I wrote about who had a bone marrow transplant and is on the road to recovery. I mean seriously, what these two have gone through and will go through. And again, I was whining about 10 stupid miles.

And then, I thought about my parents and my sister. I had no more words. I had no more thoughts. I needed to just do this and get it done. Mile seven sucked. Mile eight got better. Mile nine came and went, with lots of walking. Fast walking, but walking nonetheless. At this point, and really, at any point, I didn’t care about the walking. Yes, when I am in a race, I want to run the whole thing. I don’t want to walk. But, I have nothing against walking. Truly, I don’t.

And then, it was the last mile. Before the whole pacer thing, I had a goal in my head that I wanted to finish the race in two hours or less. I most of the time don’t set goals when it comes to races anymore, but as I thought about this race, I thought to myself, “Okay, 10 miles, 12 minute mile pace equals 120 minutes or two hours.”

That was my goal. Finish the race in two hours. Was it close to last year’s time? Nope. But, last year, I weighed probably 10-15 pounds less, had actually trained and wasn’t sick or dealing with plenty of other issues. So, if I finished in two hours, I was going to be happy. Really happy.

And then…..the whole “Trust the pacer,” thing happened, which eventually lead to not being able to keep up, which lead to giving up.

By the way, do you know how hard is to get your mojo back after you give up? It’s friggin’ hard. Really hard. I have never been in my head more than I was during this race. It was ridiculous. UFFDA!

Well, as I began the last mile, I looked at my watch. HOLY CRAP! I wasn’t to the two-hour mark yet. I COULD ACTUALLY DO THIS IN TWO HOURS. Yes, I was screaming that in my head. I told myself to buck the hell up and get going. I could even walk some if I wanted to.

And, I did. I did not even run the entire last mile. And you know what? I was entirely okay with it. 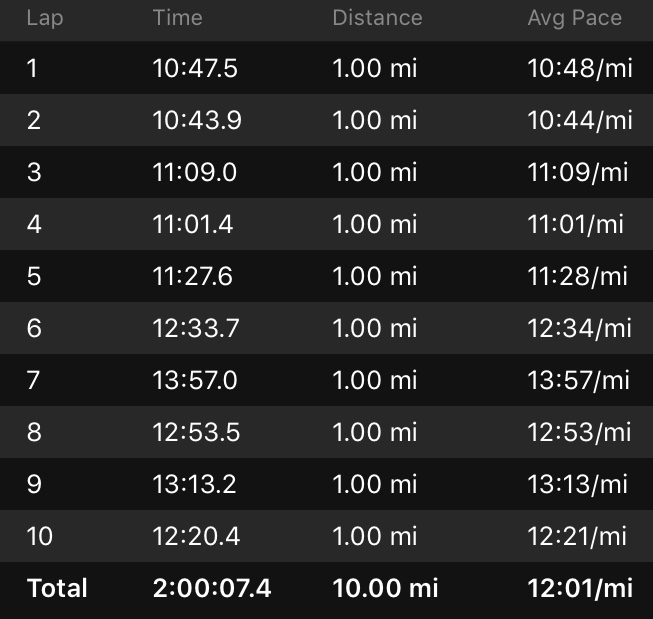 PICTURE: My splits from my Garmin watch. You can totally tell when I gave up.

As I inched my way to the finish line, I saw Al. He was waiting at the corner cheering me on. There were a few more texts between us before  the race was over. He was the best cheerleader and encourager. He is so awesome. I almost broke down when I saw him, but instead, I just handed him my water bottle and with one foot in front of the other, I ran, jogged, fast walked, in what felt like slow motion, across the finish line. The announcer congratulated me, actually pronouncing my name right. It was awesome. 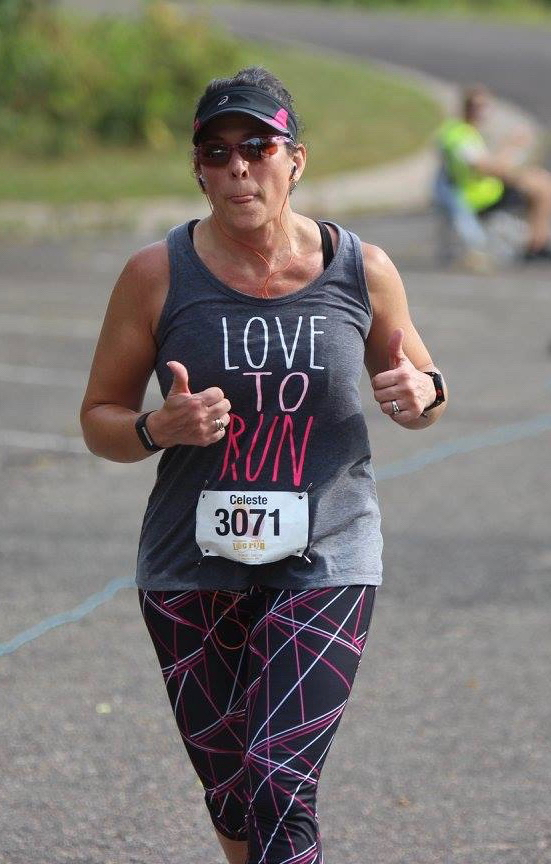 PICTURE: This was right before I crossed the finishing line. And let me tell you what, the tongue out helped. Trust me. 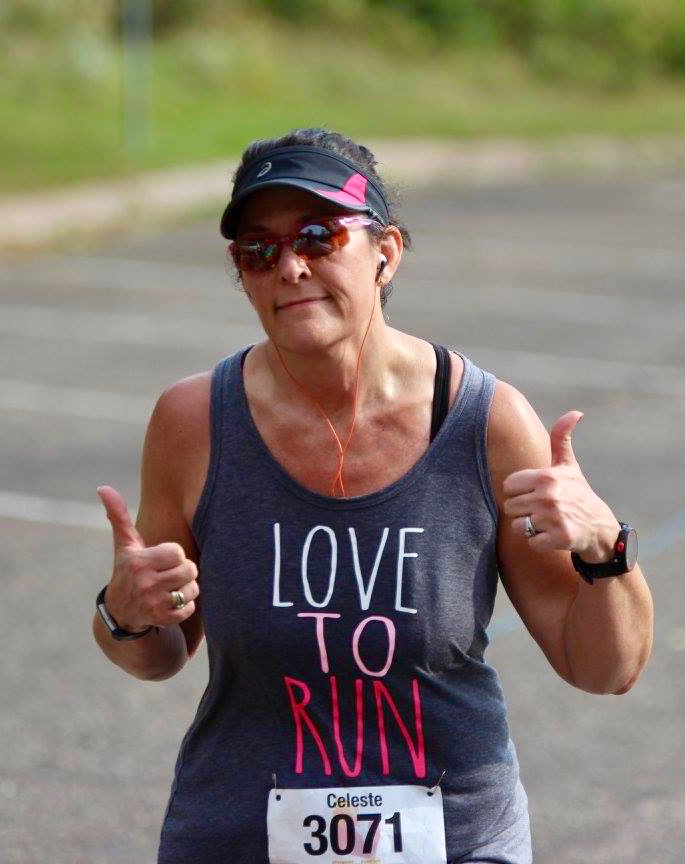 PICTURE: This pretty much sums up exactly how I felt.

As I crossed the finish line, I stopped running and began walking, almost deliriously. I was a big ball of sweat. I was thirsty. I was hot. My feet hurt. My body hurt. I actually could feel that blisters had formed under both my big toes. But the biggest surprise of all, however, was that my asthma wasn’t bothering me. I was breathing just fine. Everything else sucked, but at least I could breath.

And guess what, I finished. And in two hours. I actually made my goal. 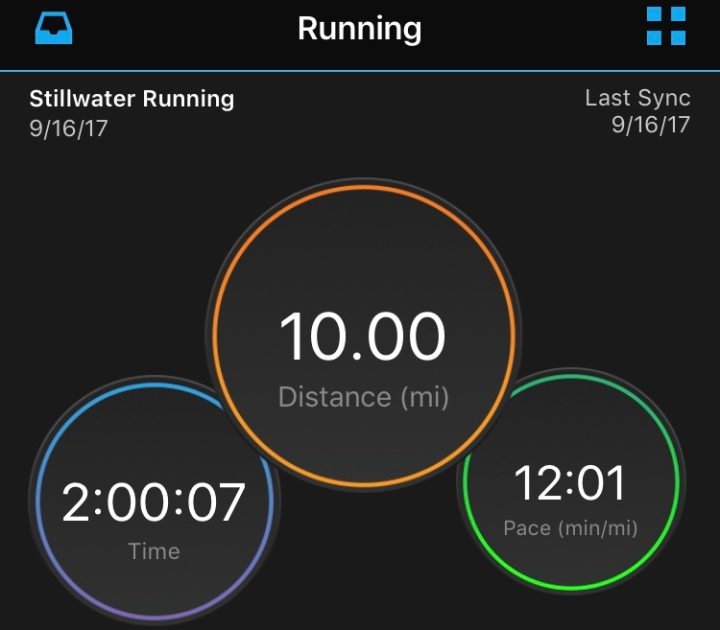 PICTURE: My distance, pace and time. This is from my watch. My official time, however, was 2:00:54. Still two hours in my book!

I kept walking until I found a place I could sit. I found a table and basically dropped to it. I threw all my stuff on top. My medal, my water bottle, my phone, my headphones. I just needed to sit. My head was spinning. Al found me and brought me cold water. I poured some of it on my head and drank the rest. I wasn’t feeling good. At. All.

But, I had to take a picture of Al because there were these really cool signs the race people had put out for people. Al found the perfect one for himself. 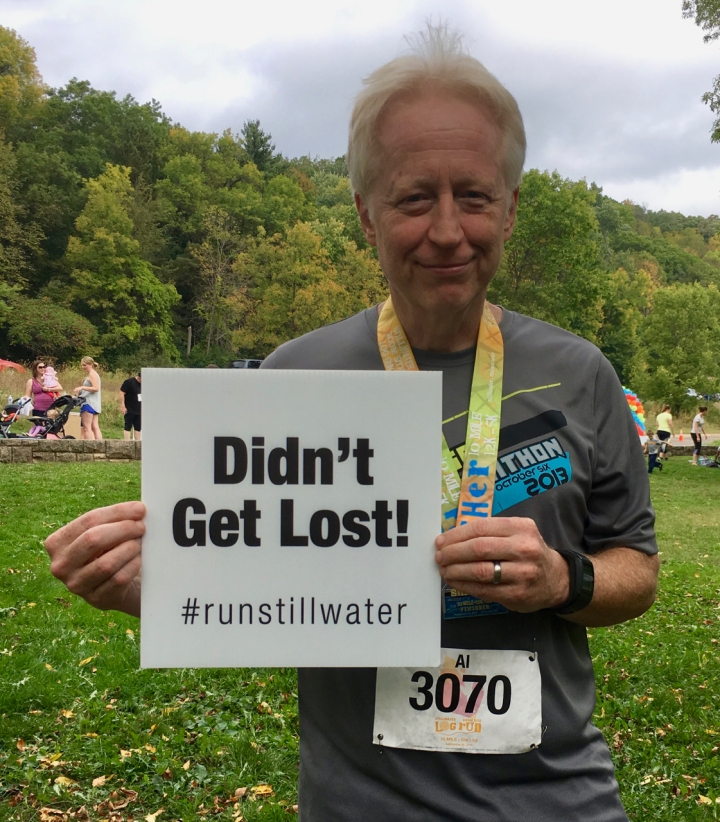 PICTURE: Yay, he didn’t get lost, which he tends to do. 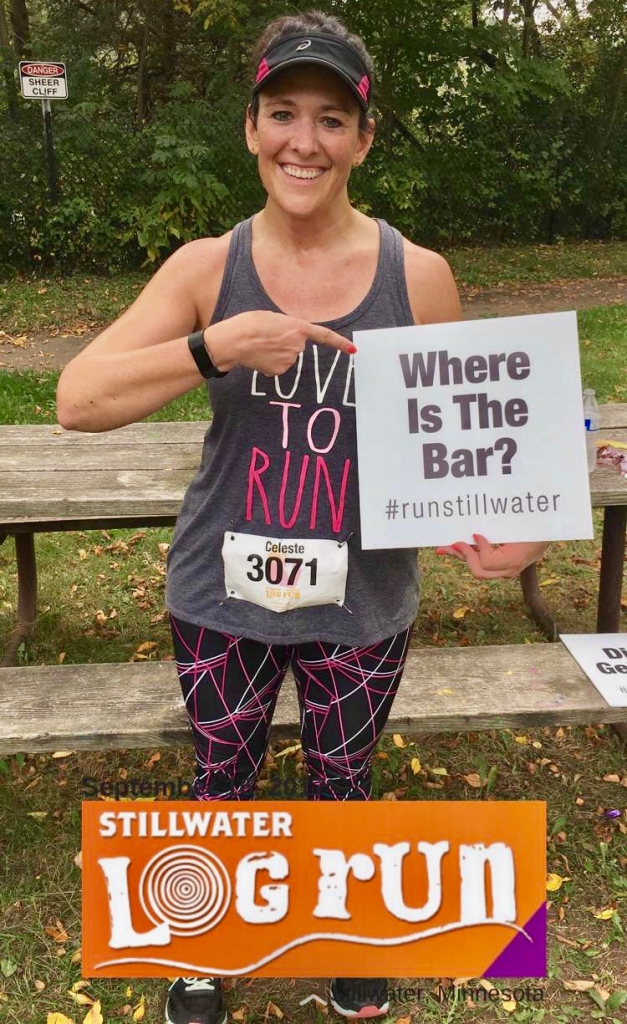 PICTURE: Don’t let the smile fool you. I was still not feeling good. But the sign was funny, so I had to get a picture, too. 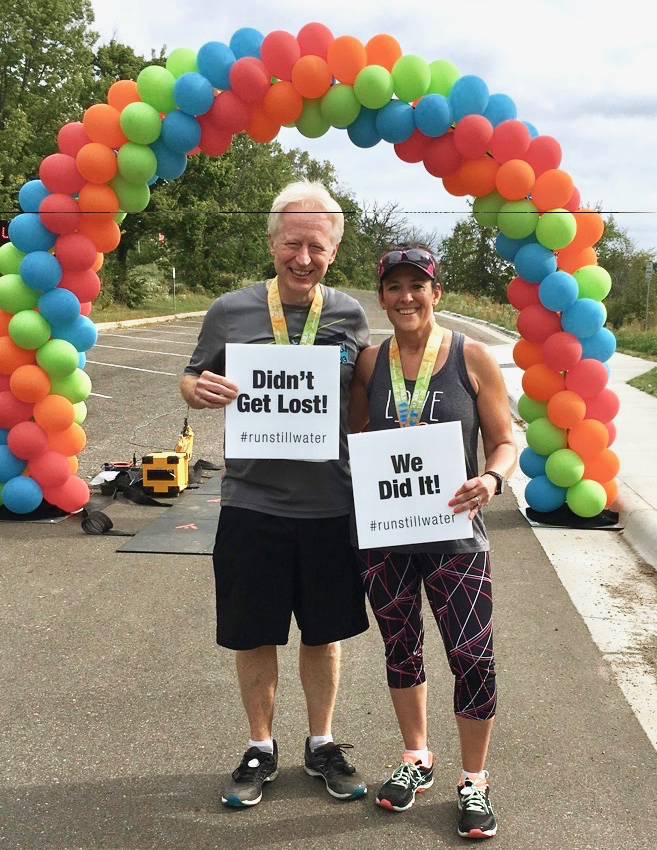 Picture: I found a different sign. But Al still had to have the same sign as it was SO PERFECT!

So I eventually felt better. I drank more water and I ate a banana, which definitely helped. And after I felt better, we got a good finish line picture of the both of us. This smile was pretty genuine. I was so happy to be done and I was happy that yes, WE DID IT!

Al got a couple of pictures of what I really looked like right after the race. 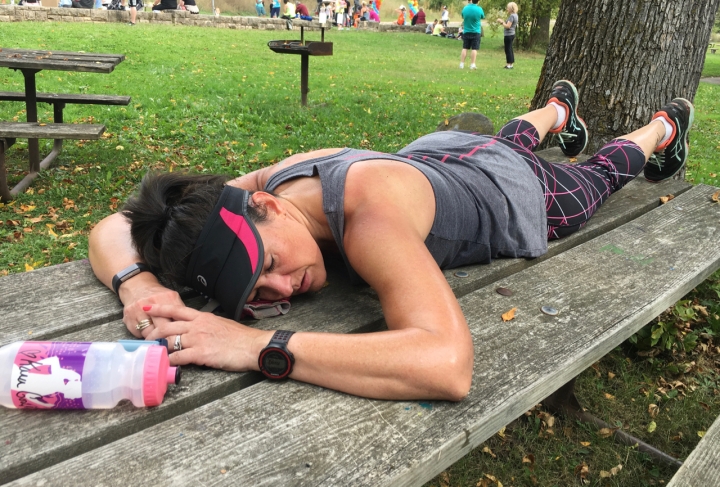 Yes, I feel every bit as bad as I look. My face says it all. 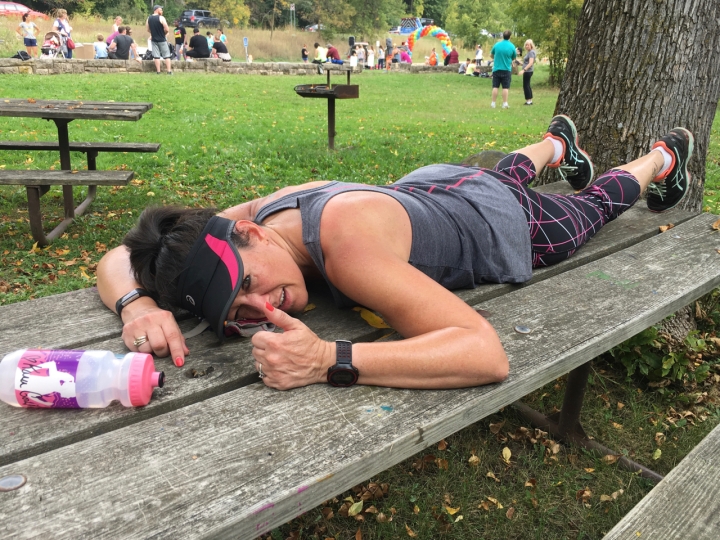 And then, that night, back in our hotel room, we signed up for yet another run! No matter how bad the race is, I still love doing it and will do until I no longer can!