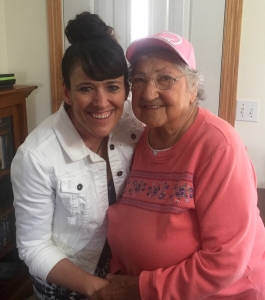 Even though I use writing as therapy, I don’t have too much to say yet (yes, it is still plenty!). I will. When the time is right. For now, my heart is too heavy and it feels like it was smashed to smithereens. I know it will heal, but I also know it is going to take time. Lots of time.

I spoke at my mom’s funeral and thought I would share with you what I read.

I asked my siblings to share with me either a memory or a favorite thing about our mom.

Fishing with her anytime he could is what Charles remembers. Whether in Willmar, Alexandria or even on Mr. Keller’s lake near his house in Glen Carbon, Illinois, it didn’t matter. They both LOVE fishing. And honestly I think they would stay on the lake all day if they could. They were pretty good at it too because there were plenty of fish to eat when they were done.

Mike remembers him and my mom singing and playing guitar at the Lone Tree Tavern as Country Mama and Mike. From singing duets such as “I Heard the Bluebirds Sing” to fun little ditties like “She Waded in the Water” and “Running Bear” they made quite the singing duo. A couple of his favorites though were “Why me Lord?” and “Seven Spanish Angels.”

As for Karen, I am going to read what she posted on FB because she felt is was one of the most important things our mom did for us. Here’s what she said:

“When we were really little, mom took a guitar lesson and then taught herself how to play guitar, harmonica, accordion and organ. She taught us kids to love and appreciate music. I have four brothers and two sisters and most of us play the guitar, and a couple play the organ and piano. I AM NOT ONE OF THEM! Karen said, not only did we grow up with a house filled with love, but it was also filled with music and she is truly grateful for that.

Steve remembers when he lived on Green Lake in Spicer and the time he rented a fishing boat to take mom out fishing. Steve said Mom hooked a “real nice” northern and he was trying to help her reel it in when he hooked his own big northern. They were both fighting to reel in their fish. Steve helped mom land hers and it was a story – you know, one of those fish stories – that mom told all the time.

Al said mom was a kid at heart. He will always remember mom sliding down the water slide at Robbins Island Park in Willmar and that he had thought about sharing the picture of her doing so but he knew how much she hated that picture and so he didn’t feel it was appropriate to share. He also remembers a water fight they had. Apparently he picked up the garden hose and aimed it at her face not realizing the water was on. She gave him that evil look and told him he wouldn’t dare. Well, we all know how that ended. Apparently though she paid him back though.

As for me, I honestly don’t know what to share.

I found a book of poems that I gave to my mom after we made it through my teenage years called “Mother, Thank You for All Your Love” and I am going to read what I wrote in that book and also one short poem from the book.

Of all the great memories I have of my mom, I honestly think the one I am going to treasure the most is from Friday morning before she died. Al and I were in her room and I was curled up at the top of her bed fluffing her hair. All of sudden she burst out singing “In the Arms of an Angel,” her favorite song my sister, Karen, sang. I quickly grabbed the CD Karen made for mom and popped it in the CD player. The first song was that exact song. Lying there with my mom as she was dying, listening to my sister sing, I knew at that moment my mom was soon going to be in the arms of the angels.

I am including a link to that song, which was originally done by Sarah McLachlan. Click HERE for the link.

After the funeral, my sister, Karen, wanted to get a picture of all of us siblings. As much as I really didn’t want to take that photo, I am so appreciative and grateful that we did. I love my siblings more than they know and I am beyond thankful that they were they for me throughout this weekend. I broke down several times and had a few major meltdowns. They were all right there for me and I can’t thank them enough. The four boys, left to right, are Mike, Charles, Al and Steve. And then my sis, Karen, and obviously, me, are in the front. Love you all to pieces.

Next to my mom’s urn, we didn’t do the typical “mother funeral spray” of flowers. Instead, we did a bouquet that represented us. We did eight flowers for my mom’s eight children: red rose for Donna, pink rose for Susan, purple iris for Karen, yellow daisy for me and four carnations for the boys. Broadway Floral did a phenomenal job and the bouquet was gorgeous and perfect.

For Saturday night supper, my siblings, along with their spouses and children, went out to dinner to celebrate my mom’s life. along with several birthdays that took place in February, March and April, including my mom’s which is April 26. My brother, Steve, bought a margarita and put it in the middle of the table to represent mom. It was awesome and perfect. 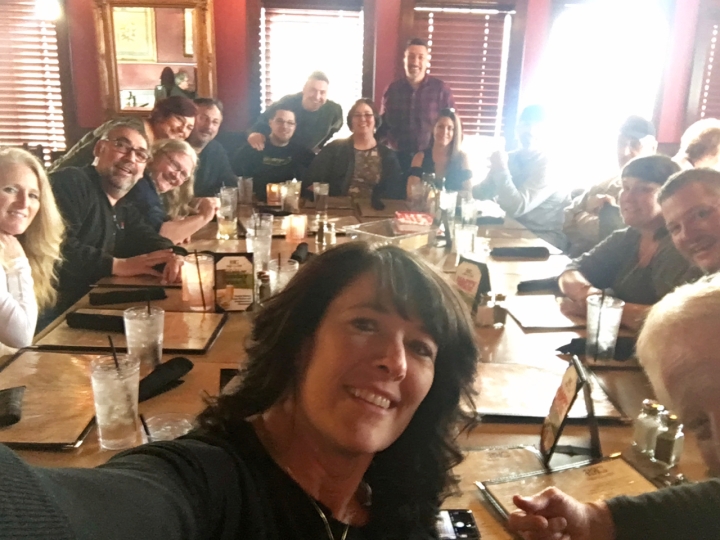 My nephew, Andy, catered the luncheon after the funeral and made one of my favorite childhood dishes that my mom used to make. It was awesome and absolutely perfect. On Sunday, we had leftovers and I decided to reheat it in my mom’s casserole dish that she would have made her “goulash” in. My heart was happy.

I love my mom with all my heart. She meant the world to me. And I am so grateful for the time I got to spend with her this past year. Even though at times I would get frustrated, I am thankful I was there for her and she was there for me.