Things I may have been worried about during our last race…my asthma, the weather, lack of training, the course and whether or not I would be able to run the WHOLE thing. All. Ten. Miles.

Last Saturday, March 7, the hubster and I ran in Twin Cities in Motion’s newest race, the Hot Dash 10-miler. I was pretty pumped up about the race because this is the earliest in the year we’ve done this type of distance. Usually, we only do 5Ks or 10Ks, but never a 10-miler this early in the racing season. I was also, to be completely honest, really nervous about the race because January and February weren’t so nice to me.

Not only did the weather not cooperate – Hello! I live in Minnesota! – my asthma really, really, really hit hard. I was put on prednisone on February 2 and again, most recently, on March 2. Yes, a month apart. I am not sure if the ever-changing weather is blame – with bitter cold temps – or what, but this is the worst my asthma has EVER been. Between the weather and my asthma, I have really slacked on getting in any miles. In January, I only logged 55 miles and for February, I barely got over 40 miles – 40.75 to be exact.

So, with a 10-mile race slated for March 7, you can understand why I was nervous. Lack of training really makes you doubt yourself and your running capabilities/abilities. I truly wondered if I was going to be able to run the whole thing or if I would have to some walking. And as for my time, I had it in my head that if I made it in at least two hours and five minutes, I would have been satisfied. My goal really? To be able to breathe and not have any problems with my asthma during the run and well, I wanted to run the whole thing, which is always my goal. Not that there is anything wrong with walking. My goal for myself, however, is to always run. That’s just a personal thing. I have nothing against anyone who walks during a race. There are people who do a walk/run combo and will beat me every time. That’s cool. I, personally, just have a thing about having to run the whole distance. Even if it makes me slower! 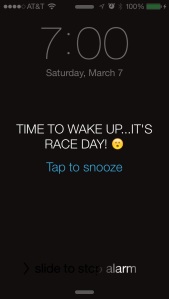 Race day! I love being able to set my alarm and label it. Not sure why, but it just makes waking up more enjoyable if I know there is going to be a message. Stupid, I know, because I am the one who types the message, but nonetheless, I still like it!

My breathing was doing much better by race day and I wasn’t too worried about it. Yes, I still carried my inhaler with me and yes, I did use the nebulizer before we left AND yes, I did rub some R.C. Young Living Oil on the inside of my face mask to see if that would help with my breathing as well. R.C. is one of the oils used for asthmatics. Besides my “normal” meds, I have been using the oils, too. I am game to try anything that might help. I have been using the R.C. and Raven oils. I really like the R.C. Whenever I rub it on my chest and neck, it seems as if I can instantly breathe better and it smells so wonderful!

The weather couldn’t have been any better for the race. Well, okay, there could have been a little less wind, but you can’t have everything can you? The sun was shining and it was above freezing. In March, in Minnesota, that’s just about perfect. Dang near tropical, if you ask me.

This was after the race. Both of us were a tad bit overdressed for the actual run. Al actually took his hat off for part of the race because he got overly warm. I, too, was warm, and really sweaty, but it felt so good to be THAT warm when running! After the race, however, when standing in the wind, it did get downright cold. We were both shivering on the walk back to our car.

As far as being concerned whether or not I would have to walk part of the race, I guess I didn’t have to worry. I ran. The. Whole. 10. Miles. My legs were a little stiff and sore, at least my quads were, but for the most part, the actual running felt good. The course was mostly flat. Okay, it was entirely flat except for going up a little (okay, slightly big) bridge. I really loved the course. Scenic. Open. Flat. What more can you ask for? There were a few points where we were running into the wind, but truly, it felt like the wind was at our back the entire race.

So, my asthma didn’t act up during the race. The weather was stellar. The lack of training didn’t seem to affect me. And, like I said, there was apparently no need to worry about whether or not I could run the whole thing. I did. And truly, it felt great. Earlier I said that I would have been happy if I made it in two hours and five minutes. Well, I did that. Actually, I made it in under two hours. My official time was 1:48:55. Yep. WAY BETTER than I anticipated.

The only thing I wasn’t worried about is the thing I guess I should have been worried about. My Garmin. My awesomely awesome trusty Garmin.

It stopped working. And I……..panicked. Truly, I did. Which to tell the truth is a little ridiculous. It’s a friggin’ watch. I have never – NEVER EVER – had trouble with any of the Garmins I have had in the past nor have I had any troubles with this one. My Garmin. My Forerunner 220. My trusty pal. My friend. My running partner. My best friend. My lifeline to my stats. Okay, I know, that’s laying it on a little thick. But seriously, I am THAT attached to my Garmin. I won’t go into detail about what my Garmin does. If you really want to know, read all about it HERE! Trust me when I say it is a runner’s best friend. Well, at least for those who love their stats! Isn’t she pretty? 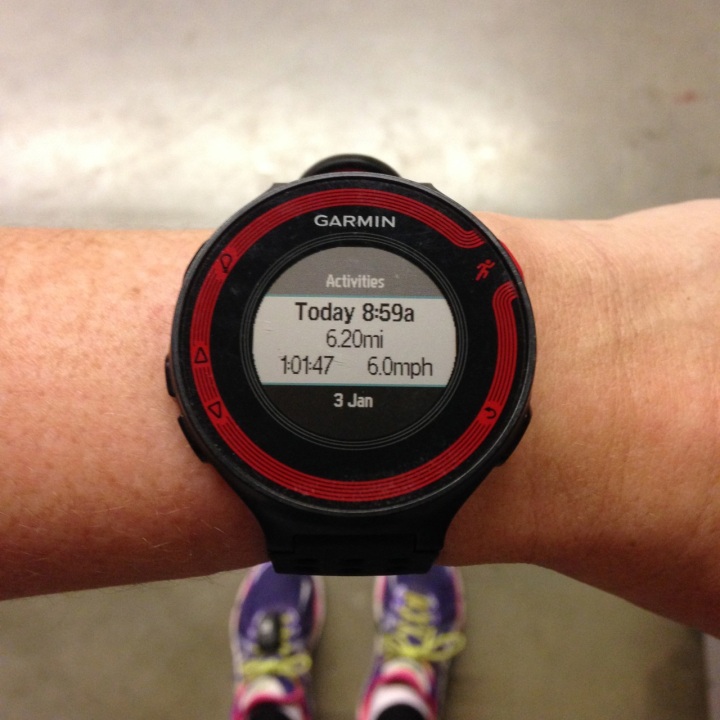 Anyway, I had charged it overnight like normal and took it off the charger like normal. As we were walking up the starting line, I turned it on like normal. But, unlike normal, it froze up. It would’t turn on. It just kept flashing the word, “Garmin.” I pressed buttons. I stopped breathing. Okay, I didn’t stop breathing, but I did get slightly annoyed. No really, only slightly. I expected a meltdown and to be completely livid if it ever stopped working and it wasn’t that bad. For a minute, I thought about not running the race. Kidding. I am JUST kidding.

Instead, I just thought, “Oh well, there’s nothing I can do now. I might as well just run.” And that’s what intended on doing. Until I remembered I had my phone with my and I have the Garmin app on my phone, which to my delight, worked beautifully. A little cumbersome, but it worked and I got my data.

So what about my Garmin? Well, we tried everything to get it started. Did a hard reboot on it (Al Googled it and watched a YouTube video on rebooting your Garmin). Tried plugging it in. Over and Over. Nothing. Absolutely nothing worked.

There was nothing that could be done until we got home and I could contact Garmin via phone on Monday.

After the race, we relaxed in our hotel for quite awhile, I did some studying and then we finally went out to grab some grub. Al found a great little authentic Mexican restaurant on East Lake Street in Minneapolis called Taqueria Los Ocampo that we ordered takeout from. GREAT FOOD! We didn’t really feel like going out-out. We really truly just like eating in our hotel room. Yes, I know, we are a little weird. We do this because of several reasons, but one is that I like to have either beer or wine with my food and I am not a fan of drinking and driving (that’s another whole story in itself!), so we just typically make food in our hotel room or bring it back with us. This time, we just brought it back with us. Right next to the restaurant was a liquor store, Chicago Lake Liquors. Interesting, to say the least. I will say there was a great selection of beers, which we opted for instead of wine.

We bought a couple different kinds and just shared one of each bottle.

Both of these were VERY good. My fav of the two was the organic chocolate stout. 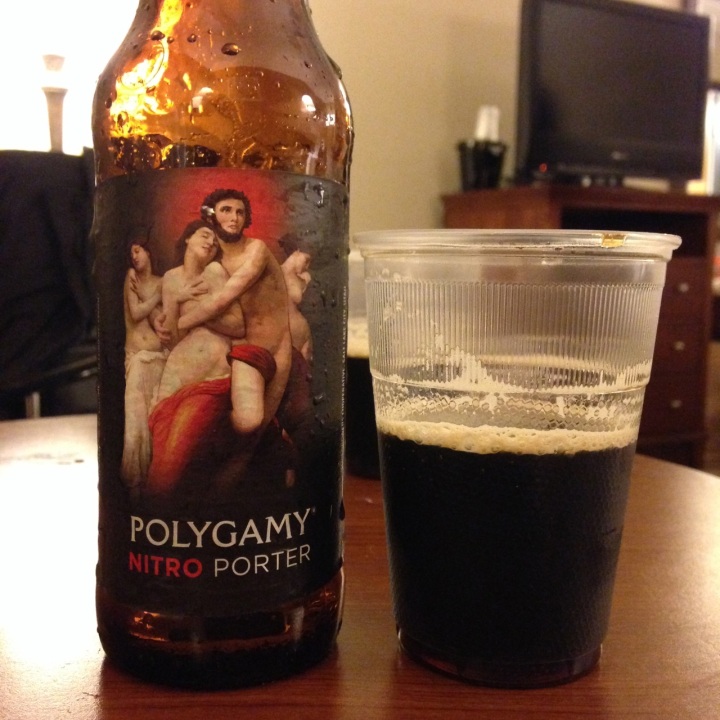 Yes, weird name for a beer, but it was pretty good. Smooth and creamy and not too hoppy or bitter. This was Al’s favorite.

And of course, I topped off the night with my ultimate favorite beer, Buffalo Sweat from Tallgrass Brewing Company! Seriously, this beer tastes like dessert. Oh, it is so good. Great, really! YUM!

I had planned on making a stop on the way at my favorite cupcake store in Maple Grove, but I figured all the calories I burned or all the activity points I had earned during the 10-mile run had been used up by the Mexican food and beer. So, we didn’t stop. BUT THEN………this happened in St. Cloud instead: 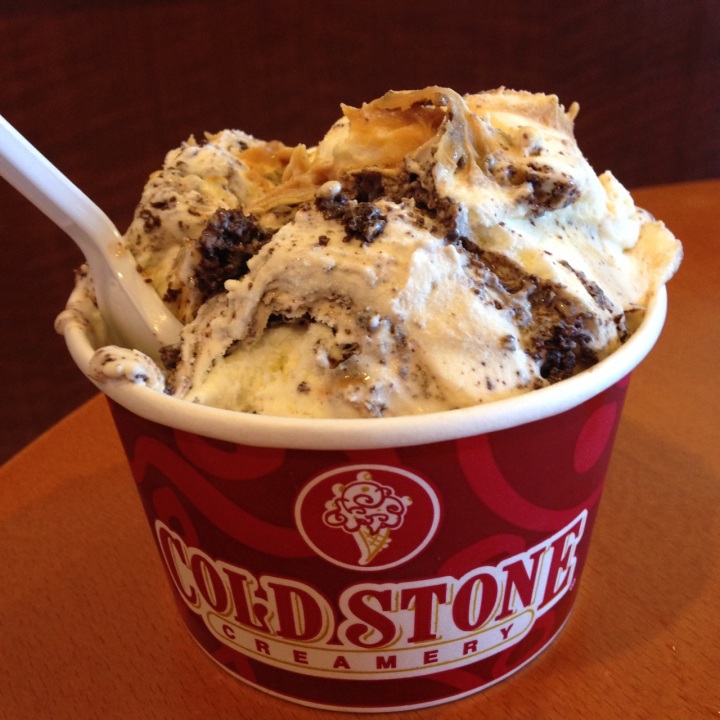 Yep. My fav – Birthday Cake Remix with no sprinkles and peanut butter added instead. Oh. M. GEE! This is SOOOOOOOO good. And yes, I know. SOOOOOOO unhealthy. But, that is why I live by the 80/20 rule…80 percent of the time, I am going to eat as clean and healthy as I can and the other 20 percent, I am going to live it up and splurge. AND……not feel one ounce of guilt when I do! This little treasure cost me 26 Weight Watchers PointPlus Values. And you know what, it was worth every single one! And in case you really want to know, I only earned 20 total activity points on Saturday, the day I ran 10 miles! YES, 10 miles only earned me 20 activity points!

So, are you wondering why Saturday’s race was the best AND the worst?

Best = Asthma didn’t act up, breathing was great, weather was dang near perfect, course was flat and I ran the whole thing.

6 thoughts on “Best AND worst race!”