So yesterday was a pretty cool day (no pun intended as I live in Minnesota!). Because it was a particular awesome day – for no real reason – I thought I would share it with all of you – my fantastic readers.

I was up bright and early on a Saturday morning, as I had to work at Vital Fit Club. I am not normally on the schedule for Saturdays but my co-worker needed the day off, so I volunteered to work her shift. And it was only from 7 a.m. to noon. Not a big deal. Work was fantastic, as usual. It’s amazing how much I love that place. I really did enjoy working for Weight Watchers, but I really, really, really enjoy working at the fitness center. I cannot wait until I can start teaching classes. Some. Day. It would help if I started my training! Stupid money. But that’s another whole story in itself! UGH!

Anyway, after I got done working, I stayed at the club and ran on the dreaded dreadmill, yes, that is what I call the treadmill. I eeked out four miles! Yay, me! And of course, I rehydrated with my favorite beverage – Nuun! Today’s flavor choice was tri-berry! #nuunlove #nuunhydration #nuunbassador 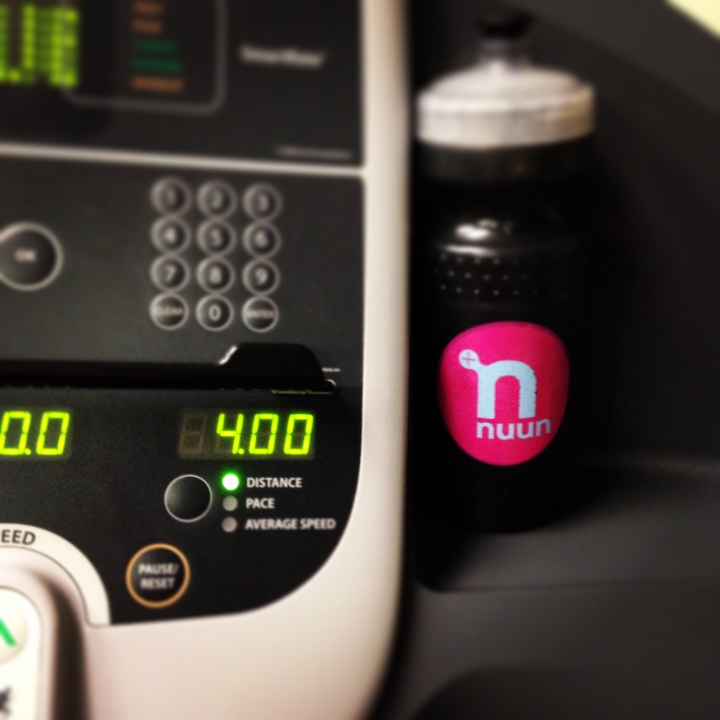 While I was getting ready, I got really hungry and I wanted fruit. I couldn’t decide which fruit I wanted, a grapefruit, an orange or an apple. So, I decided to choose…

I had breakfast around 6:30 a.m., which was a bagel with cream cheese. Then, I had a protein shake when I got done running at the club. (I hope you don’t mind, Heather, but I took a little of the sample stuff we have of the vanilla Quest protein powder!) I need to purchase some of that stuff! O. M. G. Good! Having just a bagel and a protein shake was probably not enough, which is why by 3:30 p.m., I was starving. Because I knew we were going to be having a great supper, I opted for the three fruits (much healthier) instead of a bowl of cereal!

Anyway, when I was finally done getting ready for the day, the hubster and I headed out. Our first stop…Target. For the first time ever, we used the Cartwheel app thing for Target and we saved a whopping $1.22! We also had some actual paper coupons and altogether, we saved almost $9. Not bad for newbie couponers! We haven’t really ever been the coupon-type people, but I am going to start trying to use them a little more. Saving money is always a good thing!

Second stop was Elden’s Fresh Foods, my husband’s favorite store I think. Because we had actually bought most of the groceries we needed for our evening meal at Target, we didn’t have much to pick up at the actual grocery store, so it was a quick in and out. Which is surprising because like I said, this is my husband’s favorite store. To say he loves grocery shopping is an understatement. Even though I give him grief about it all the time, I am SO HAPPY he loves to do it because I don’t! Thanks, honey, you’re the best grocery shopper ever!

I did find a special little treat while we were there… 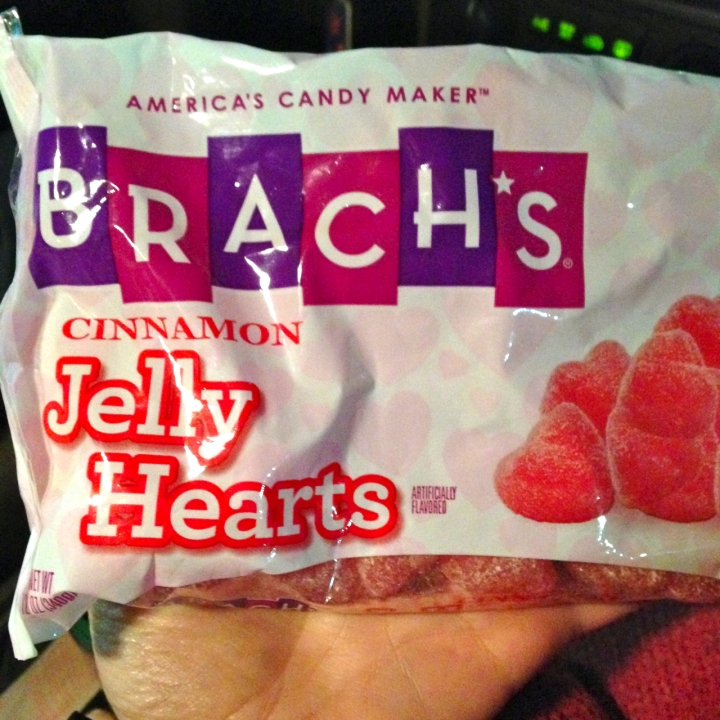 A friend of mine, Jo, shared these little gems with me several years ago. Now, every time it gets remotely close to Valentine’s Day, we both go in search of them. I had to text Jo a picture of them as soon as we got in the car. She was jealous. She hasn’t found any yet this year. Good thing she’s coming to Alexandria on Friday and I bet I know where her first stop is going to be!

After we got home from our shopping excursion, which was around 6 p.m., we put our purchases away, turned on some good ol’ hair band 80s music and then got started on our meal. First up, the appetizer, which was just toasted French bread dipped in balsamic vinegar and oil (I use two tablespoons of balsamic to one tablespoon of oil). This is one of our favorite appetizers and it is so simple and easy. Our favorite bread is just the Market Pantry demi wheat French bread from Target.

We usually have wine with our appetizer, but I was really in the mood for beer, so that is what we had. I recently discovered that I love dark beer. But not the typical Guinness-style dark beer that is bitter and hoppy. I like smooth, creamy, non-bitter dark beer that tastes more like drinking dessert than drinking beer. If that makes sense. Some of my favorites are Brau Brothers Moo Joos, Sugar Shack Maple Stout, Negro Modelo, Southern Tier 2X Stout, New Belgium 1554 and my ultimate favorite, Tallgrass Brewing Company’s Buffalo Sweat Oatmeal Cream Stout with vanilla bean. Yes, it is THAT good. 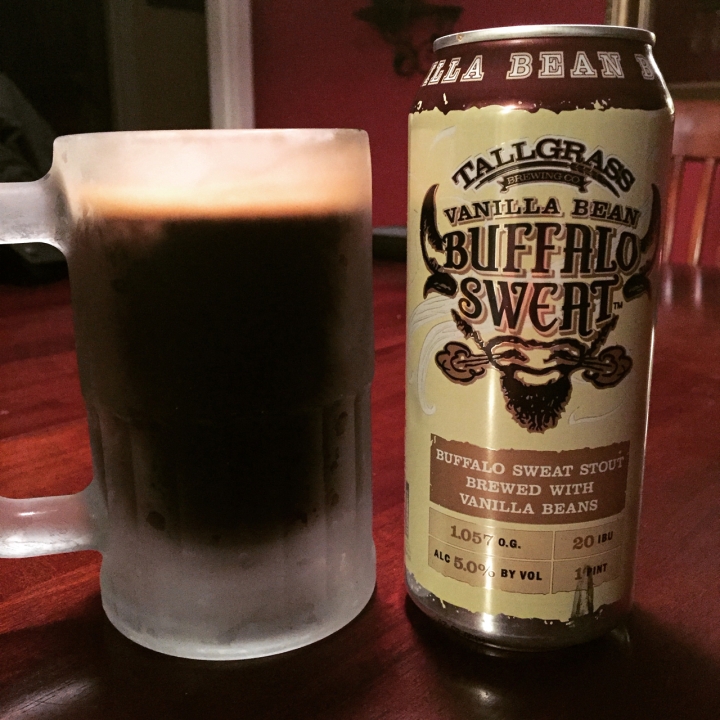 After we finished our appetizer, we started making our meal, which was barbecued mahi mahi with yellow pepper-cilantro pesto (and yes, mother, if you are reading this, I know, you wouldn’t like it because it is fish and cilantro…no need to comment that it sounds gross! I can already hear you saying it! LOL!) and our side dish was a variation of the warm quinoa and rice salad from The Healthy Maven. The Healthy Maven, along with Fit Foodie Finds are two of my favorite food-related blogs. And now, I just learned yesterday that the two of them have teamed up to form SHE uncovered. I haven’t had much time to spend on the site, but from the looks of it, I’m gonna love it as much as their other websites!

Back to our meal. Here are some pics: 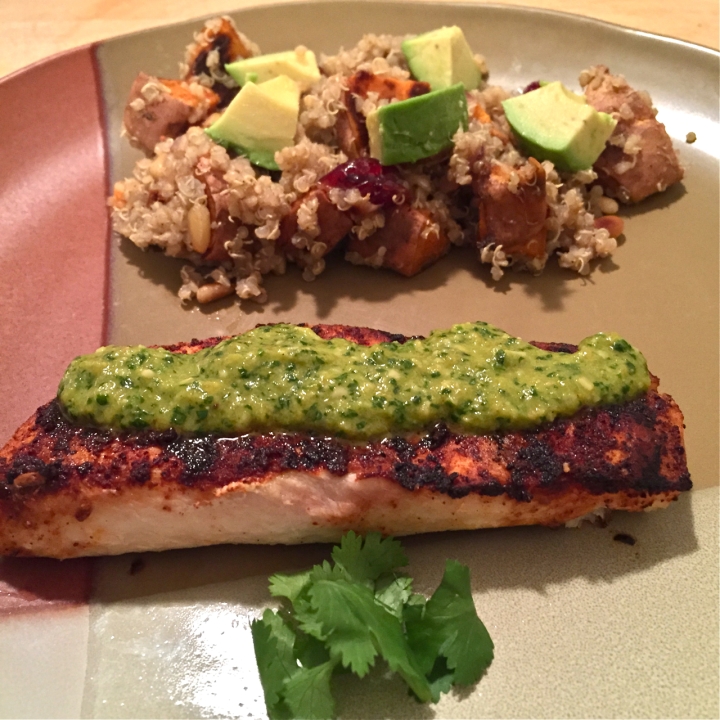 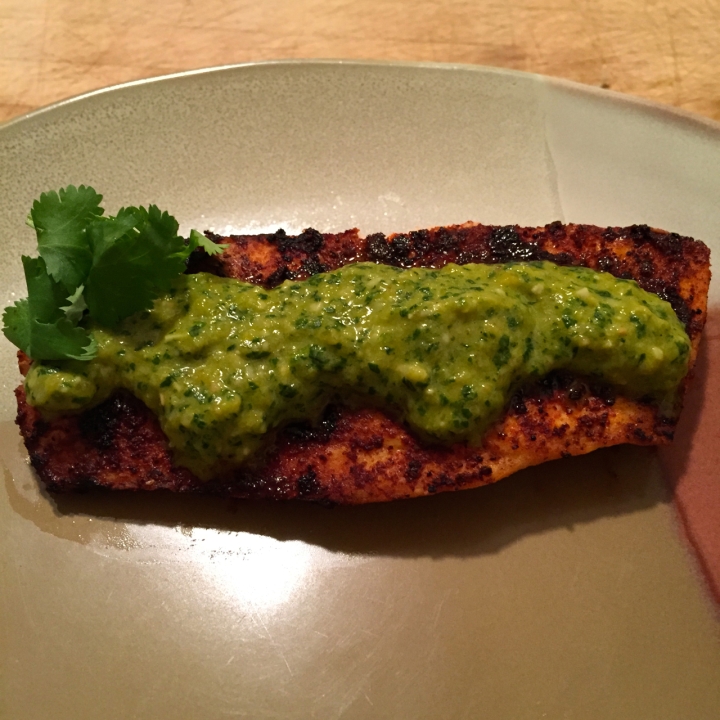 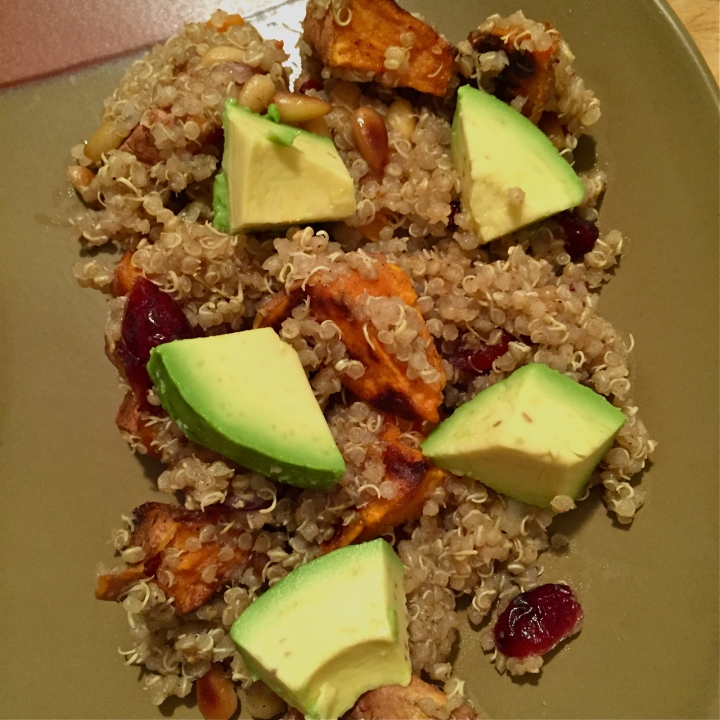 As I stated earlier, we made a variation of the warm quinoa and rice salad. We opted to use just regular quinoa; we didn’t use any olive oil for roasting the sweet potato, we used butter-flavored Pam instead; we used reduced-sugar craisins instead of pomegranate seeds; we used toasted pine nuts instead of pumpkin seeds; we didn’t use the nutritional yeast and I used about three teaspoons of cumin instead of the 1/2 teaspoon it called for. We LOVE cumin. Oh, and I used 1/2 cup of freshly squeezed orange juice.

And of course, our Saturday night wouldn’t be complete without wine. Yes, we did have wine with our meal!

And no, we didn’t drink it all. Darn close, though!

For my Weight Watchers friends, all totaled with my beer and wine, my meal came to 43 PointsPlus values (PPVs). Yes, that may sound like a lot, but for fun, I checked how much it would have been if I would have had a Big Mac, large fry and a 32-ounce Coca-cola. The PPVs for that meal would have been 45! The Big Mac is 14, the large fry is 14 and the 32-ounce Coke is 17. I’m not sure about you, but I guess I would have preferred eating the meal I had!

After our meal, Al came up with a a great idea…to list our top 10 most memorable moments of 2014. They didn’t have to be listed in any particular order and they didn’t have to be super specific. One catch, we only had 10 minutes to do it in. And, we just had to come up with whatever was on the top of our head, we couldn’t use anything to help us remember – as in photos on Facebook!

1. Al’s birthday in Stillwater – the wineries, the beer, the brewery, the food.

3. The Denver trip – ALL OF IT! Loved the whole thing.

4. The Fargo Half-Marathon. I rocked it. PR’ed. Loved the people.

8. Becoming a Nuunbassador, a FitFluential ambassador and a Fit Approach Sweat Pink ambassador.

9. My mom’s 80th birthday party. Surprising her was the BEST!

I did add a couple more after Al and I went through our lists. I added Women Rock weekend, which was jam-packed full of fun, including going to the zoo and falling in love with the gorillas, going on a long bike ride (half getting lost!), eating some fantastic BBQ ribs and drinking iron butterflies in the hotel bar. I also added being diagnosed with asthma and also the addition of our race wall as being pretty memorable for 2014!

In case you missed it, here’s what our wall looks like (there’s been a few more medals added since we put it up!): 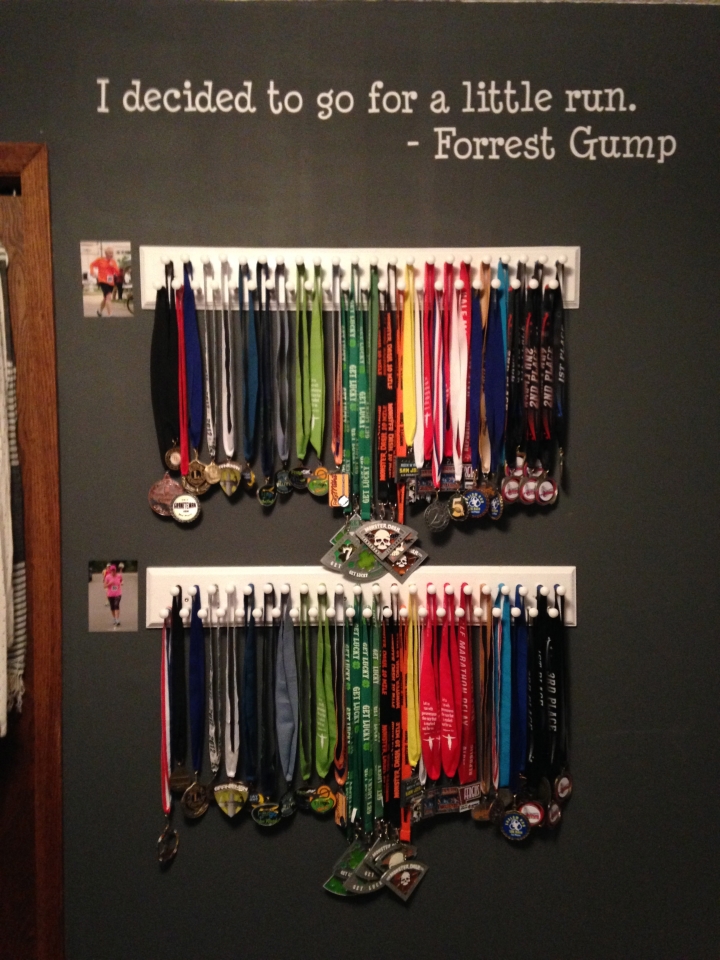 And to end such a fantastic day, I snuggle up on the couch, like I always do…in my cocoon of blankets! Al is always kind of enough to tuck me in. And yes, this is where I fall asleep just about every single night! (Yes, I was as tired as I look and fell asleep within five minutes!) 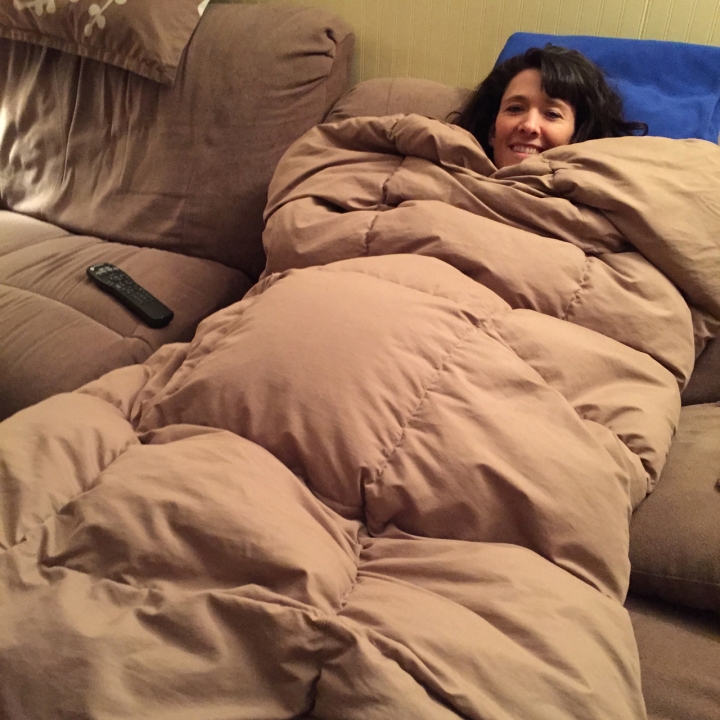 So, that pretty much sums up the day in the life of me, Celeste Edenloff, Confessions of a [former] Fat Girl!

One thought on “A day in the life…”