I’m not even sure where to begin because there is so much to share about this past weekend’s Fargo Marathon Half-Marathon!

First, please check out the short video clip that was posted on the Fargo Marathon’s Facebook page. It is seriously cool! It was amazing to be a part of such an epic event.

I have to share a really cool thing that happened to me at the start of the race. And I have to start with this because it TOTALLY made my day and I have to say, it gave me not only a huge boost of confidence, but also gave me motivation to run a really great race.

As my hubby and I are standing in the middle of the ginormous mass of people waiting to start the half-marathon, full marathon, full marathon relay and the 10K, I grabbed my inhaler and was about to use it when a tall, slender, athletic-looking woman in front of us turned around and kind of got this funny look on her face. She was kind of awkwardly staring at me like she knew me. I didn’t know her and so I kind of looked, smiled and said, “Hi.” She kept looking and for a moment – a brief moment – I have to admit, there was kind of an awkward silence…kind of. But then I think she pointed or gestured or something and she said kind of hesitantly with an air of puzzlement in her voice, “Confessions of a Fat Girl? I follow you.” Or something to that affect. She had this large grin on her face.

It kind of threw me for a loop. I was stunned. And to be completely honest, I was totally shocked that someone – out of the THOUSANDS of people around me – actually “knew” who I was. I was kind of dumbstruck.

And…honored, somewhat giddy and felt sort of like a celebrity or kind of “famous” – just a little – for a brief moment, anyway!

We started chatting and here is what I learned in our very brief encounter. Her name is Jessica. She lives in Hillsboro, North Dakota or somewhere near there. This was her very first half-marathon and she was a little nervous, but excited about it. She follows my Confessions of a [former] Fat Girl blog (which is way cool by the way!). She has lost 60 pounds (how cool and inspirational is that?!?!). She lost her weight through Weight Watchers (yep, that made her even cooler in my book!). And she is currently a free Lifetime member of Weight Watchers (meaning she hit goal, did her six weeks of maintenance and maintains her goal weight) and continues to attend meetings and weigh in every single week (seriously, she’s a rock star!). I think she said she’s missed a total of two meetings in two years – or something like that.

Our little five-minute conversation was such a confidence booster for me and seriously gave me the energy and motivation to run a great race. I asked her if she wouldn’t mind taking a picture with me and she obliged. I let her know it would be in my blog, so without further ado, here’s Jessica and me waiting to start the Fargo Half-Marathon! 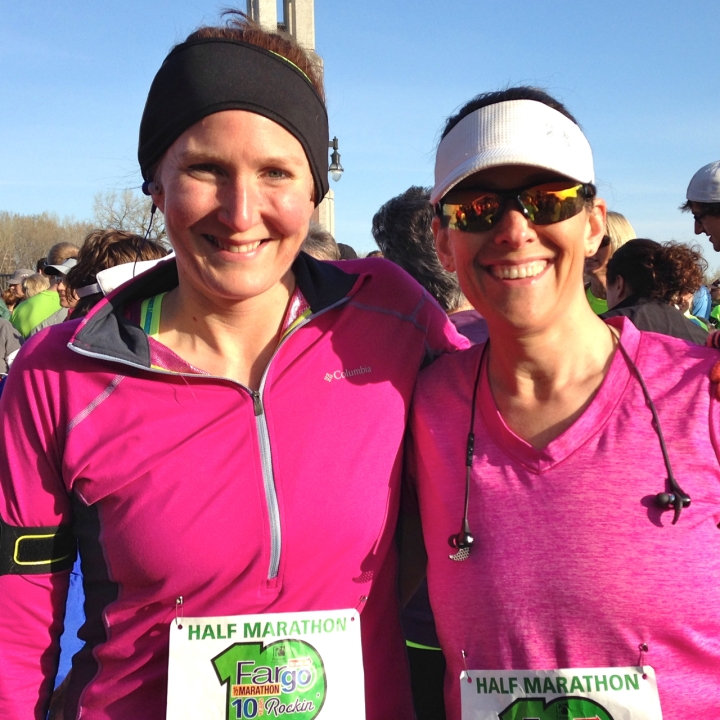 Thanks, Jessica, for turning around and knowing who I was. You rock!

Side note: In the unedited version of the photo, I could see Jessica’s bib number and so of course, I had to look up her time to see how she did and for her first half-marathon, she nailed it. She did so awesome…at least in my book! Proud of you, Jessica! I also found out her last name and stalked her on Facebook. We’re now FB friends!

First off, we couldn’t have asked for or planned for better weather. There was a slight chill in the air when we started, I had short sleeves on and got the goosebumps, but it was the perfect way to start a race. You warm up quickly when running. There was a slight breeze, but it wasn’t awful. There were no big gusts or anything like that. The wind was actually welcomed toward the end of the race when it was starting to warm up, or at least it was welcomed by me! Overall, the weather was perfect. Seriously.

Looking ahead of me (top) and behind me (bottom) at the start of the race. Yes, as you can see, there were THOUSANDS of people.

My hubby and I waiting to start the race. We talked for a bit and then a couple of minutes before the race was to actually start, after the Star Spangled Banner was performed beautifully, we separated and he moved closer to the front and I stayed closer to the middle/back of the line. This is something we always do and it works beautifully for us! He runs faster and likes to start up front so he doesn’t have to pass so many people. I run slower and like to start closer to the back, almost with the walkers so I can actually pass people. If I start out too close to the front, too many people are passing me and I let myself get defeated. My stupid mind works that way, so I have to play games with it!

The race began and the line kept inching closer and closer to the start. I got my tunes ready to roll, but didn’t hit play immediately because I only had “so many” songs on my playlist and didn’t want to run out before I got to the end. Here’s a look at my playlist (I didn’t play them in the order they are listed. I just hit shuffle and let it go!): 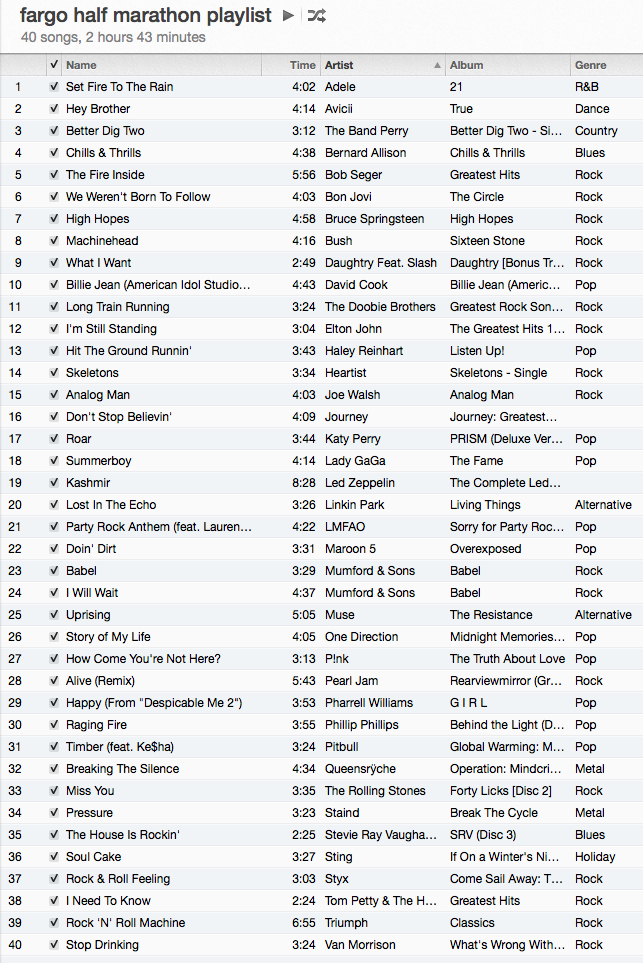 When I crossed the starting line (seven minutes after the gun went off), I tried not to get swept up in the excitement and rush of runners because I didn’t want to start out too fast. I wanted to try and maintain an easy, yet challenging pace throughout the race. I knew if I started too fast, I wouldn’t have any juice leftover for the end. I like to save a little surge of energy for the last mile. The first seven miles actually went really well. And, went by kind of fast. I maintained a somewhat even pace, only varying it by 42 or so seconds. And, I actually kept it under an 11-minute mile. I really wasn’t expecting that. And that kind of excited me. Then, came miles   8, 9, 10 and 11, which still weren’t bad, but didn’t stay under 11 minutes each. All were over an 11-minute mile, but at least they were under a 12-minute mile.

Then, mile 12 came. Actually, it was closer to the middle or end of mile 11. Not sure what happened, but I kind of hit a wall. Not a bad wall, but enough of one that my pace slowed to 12:21. I wasn’t happy and knew that I could do better. That I had that little bit of energy left. I just had to dig deep to find it. And dig I did…mile 13, the last one, I had an 11:37 pace, which made me feel much better. Tired, but better. Here’s a look at my splits, four of them were negative, so that made me feel pretty good!

Yes, my watch showed me a little short of an actual half-marathon, which is 13.1 miles. I was .04 off. And, to be honest, it kind of ticked me off. I actually like when a course runs long. Weird, I know. So according to my Garmin Forerunner 220, I actually didn’t complete a full half-marathon. But, oh well, whatcha ya gonna do about it? Nothing. 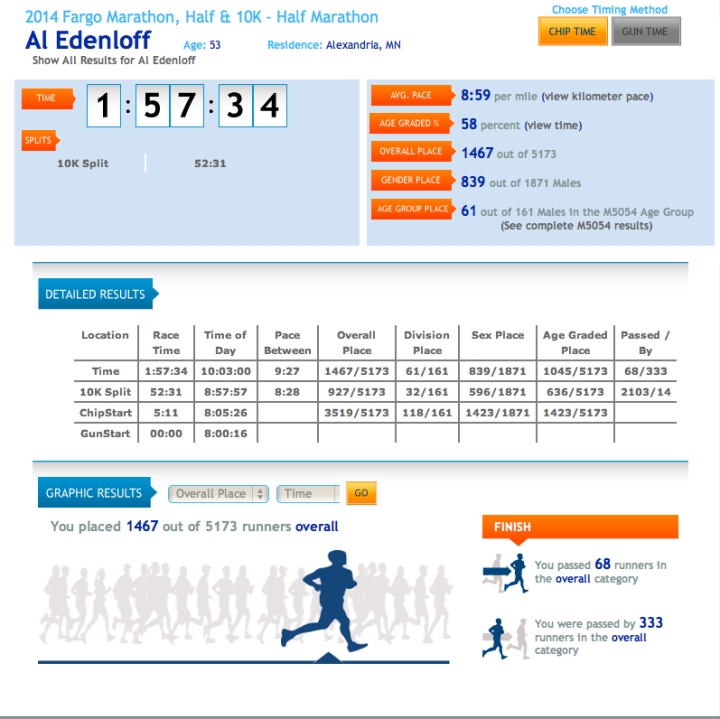 So, how does the Fargo half compare with the other two half-marathons I’ve done? My last half-marathon was in October of 2013 in San Jose, California and I finished in 2:38:31. I shaved 12 minutes and 23 seconds off of that time! And my very first half-marathon, which was in Las Vegas in December of 2012, I completed in 2:59:56. My time in Fargo was 33 minutes and 48 seconds faster. THAT made me more than happy, it made me ecstatic! I was happy last year when I shaved 21 minutes and 25 seconds off from Vegas to San Jose. I truly didn’t expect to finish the Fargo half-marathon in under two and a half hours. I really didn’t.

Overall, it was a GREAT experience. And truly, one I didn’t expect. Training wasn’t the best  because of the AWFUL, HORRIBLE, GROSS winter we had. Yes, it really was THAT bad. But, apparently, the training I did do, was helpful. I really wasn’t expecting much from this half-marathon and really didn’t have a “real” goal in mind. Of course I wanted to beat my time from last year, but I wasn’t expecting to. Truly. Especially because of my recent asthma diagnosis. By the way, I used my inhaler right before the start of the race and twice on the course. I was okay with that. And, the best part, I didn’t have a coughing attack when I was done. I actually felt good. Really good. Surprisingly good.

Here’s a pic of the hubster and I at the end of the race with our medals on: 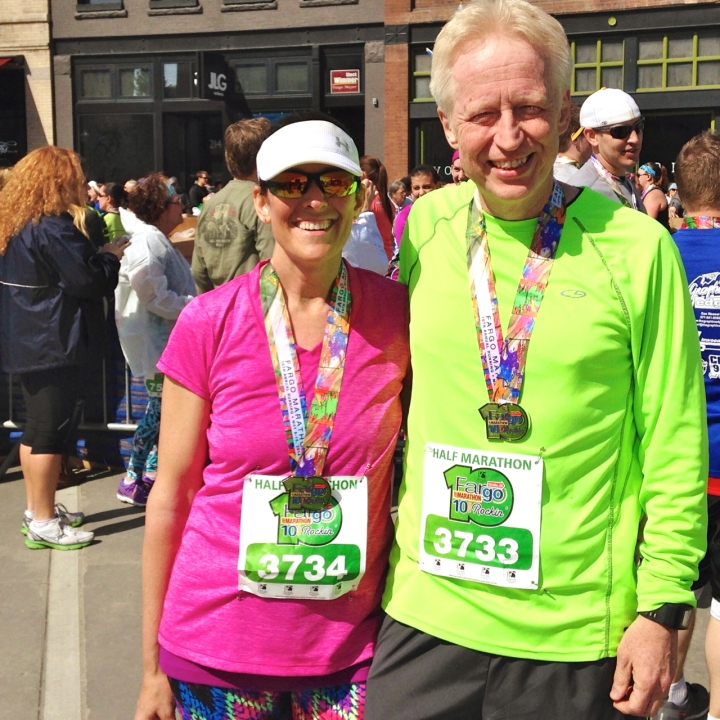 We were both happy…very happy!

After the race, we went over to our friends’ house, took showers (the best shower ever, by the way!) and then we went out for a celebration dinner at Sickies Garage, a new place to us, but a place our friends have eaten at before. Here’s what I had:

And let me tell you, it was the best Blue Moon, hamburger and sweet potato fries ever!

For my Weight Watchers members and friends, YES, it was worth every single PointsPlus Value I spent (about 30 or so!). And, there was absolutely no guilt! And for those who are wondering, here’s a look at how many activity points I earned based on my Weight Watchers ActiveLink:

Additionally, because I am such a gadget geek, besides my ActiveLink, I also wear a FitBit One, which tracks my steps. This is the most steps I’ve gotten in one day since I started wearing my FitBit:

I am hoping to do the Old Glory Run 5K in Cold Spring this Saturday, May 17.  But, I haven’t quite convinced the hubby that this is a good idea. I think he wants a little more time off. 🙂 As it stands right now, our next race isn’t until June 7, the Lake Region Run half-marathon relay. I guess I’ll just have to wait and see!

Then, starting in July, I’ll be back to training again. This time, for the next half-marathon – the Rock-n-Roll Denver Half-Marathon in Colorado on October 19! So excited. AND…nervous. Nervous, because of the altitude. But, I will just do my best. That’s all one can ever do! Right? If I have any readers in Denver, Colorado, please share your tips!

Take care my dear readers. Until next time. And don’t forget, you can always find me on Facebook – either on my personal page or my Confessions page. And, if you are an Instagram user, you can follow me there as well. You can find me on Instagram here! I would love to have you as a follower!

9 thoughts on “A look at the Fargo Half-Marathon! (SORRY, IT’S A LONG POST!)”