Around mile six, maybe even seven or eight, I started having a harder-than-usual time breathing. By mile nine, I was breathing pretty hard. Not gasping, mind you. But definitely different than my normal heavy-almost-panting-while-running breathing. I used my albuterol inhaler before the race, like I typically do any time I run – race or while out on a training run. The inhaler has always helped. Always.

About a year ago, or maybe even two now, I was diagnosed with exercise-induced asthma. Not a big deal, really. I was giving an inhaler and was told to use it before any type of strenuous exercise. Okay. Cool. I could manage that. (Although I will admit there were numerous times, I forgot to take it before running and boy could I tell a difference!) 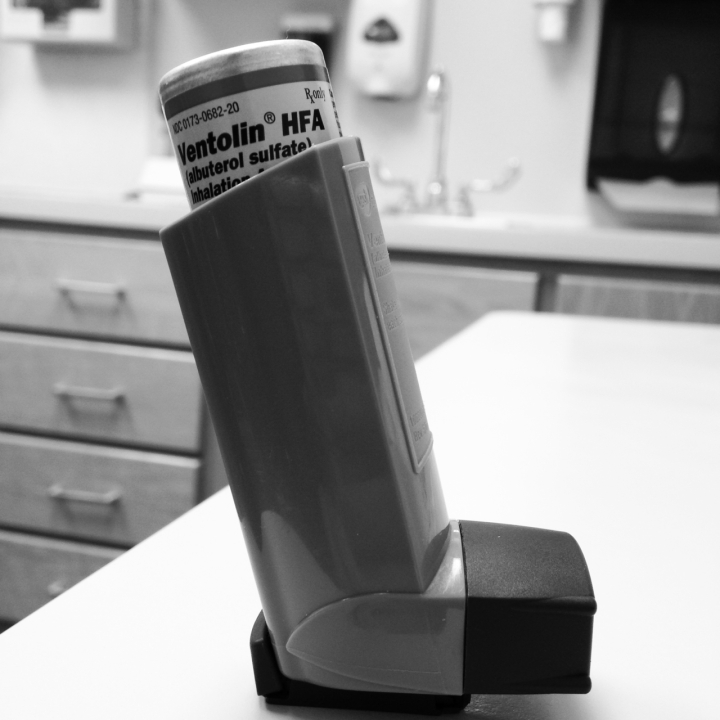 The hubster and I eventually walked into the school where the race had finished so I could use the restroom and get some water. I coughed. I sucked some more air. Within a couple of minutes, I told my husband that we had to go. I. couldn’t. breath. I needed my inhaler and it was in the car.

We made it to the car and I grabbed the inhaler immediately and took several puffs. I waited. I coughed. Trying not to panic because I knew that would make it worse, I softly mentioned that we should probably get back to the hotel. I took a couple more puffs on the way. And, I coughed. Still, somewhat, struggling to get enough air. I remained as calm as I could be. Meanwhile, I think my husband may have a little concerned because I didn’t really talk. And if you know me, you know something is wrong if I quit talking. I always talk. A lot. As calm as he tried to be, I think my husband was a wee-bit concerned and contemplated bringing me in to a doctor.

Instead, I texted my son, who has asthma and knows all too well what I was going through. He’s been going through it since he was 18-months old. He’s now 20. So yes, he knows a thing or two about not being able to breathe. I wanted to know how many times I could puff on the inhaler. He told me, “as many times as it takes to breathe.” I did just that.

By the time we arrived back at the hotel, I was breathing better. Not exactly normal yet, but better. I was still pretty quiet, except, I still had the annoying and loud cough. I ran a hot bath and sat there for quite some time. The heat and humidity of the bath, I think, helped me breath even better. I remember taking my son, when he was younger, into the bathroom and just sitting there while I let the hot water run with the door shut so that it would get all steamy. It always helped. And it helped me that day, too.

I will admit, I was slightly scared of how I felt after that run and of not being able to catch my breath. And of the coughing. Oh, the coughing. As annoying as it was, though, the coughing felt good – kind of – to keep doing it. It helped me to take better and bigger breaths for some reason.

The day of the race, it had rained, so it was damp out, plus it was windy and slightly chilly. I am not sure if that had anything to do with it or not. I ended up not actually doing too bad in the race. I finished the race, which by my Garmin, said it was 10.08 miles, in one hour, 50 minutes and 4 seconds (01:50:04). Not my best, but not my worst. Because of not being to breath so well after the race, my husband and I didn’t take any pictures at the race. Instead, we had the hotel clerk take one when we got back. By the way, my husband finished in one hour, twenty-eight minutes and 36 seconds (01:28:36).

That race was Saturday, April 12. On Monday, April 14, I had a little visit with my doctor. He put me on prednisone and told me to keep taking the inhaler as needed. I asked him if he thought I should stop running and he reassured me I didn’t have to. He thought the prednisone would take care of it, along with inhaler and that everything would be fine.

It was. For a short while. About a week. And then, the prednisone wore off and I was right back to wheezing, coughing and sucking air before, after and during all my runs.

Fast-forward to Wednesday, April 23. I was back at the doctor’s office. The wheezing had gotten worse. Especially, after a run. The coughing was still there, annoying as ever. And as usual, it was worse after I ran. I was waking up in the middle of the night, wheezing and trying to catch my breath.

Yep. I am an asthmatic. No longer labeled as exercise-induced asthma. I have the real deal. The real McCoy. I. Have. Asthmas. Plain and simple. I am sure many of you are probably screaming at me at this point, “QUIT RUNNING!”

BUT………I assure you, I am fine. I just have asthma. It’s not that big of deal. Really. I was given a steroid inhaler – Pulmacort – that I take twice a day and probably will for quite some time. And, I still use my regular inhaler – the Albuterol – as needed. I now not only take it before a run, but I carry it with me while I am running and have had to use it on most of my runs.

Before getting all bent out of shape and thinking I am damned fool for continuing to run, I will assure you my doctor said it was okay. I asked him point blank, “Do I have to quit running?” He replied, “Absolutely not!” He said we just have to manage the asthma and that there are several star athletes in the same boat as me – they are asthmatics, too.

Not that I didn’t believe him, but I just wanted to double check, so I Googled, “star athletes with asthma” and there were quite a few, including Jackie Joyner-Kersee (gold medalist track and field star), Amy Van Kyken (swimmer), Jerome Bettis (football player), Paula Radcliffe (marathoner), Dennis Rodman (basketball player), Justine Henin (tennis player) and Pete Vanderkaay (swimmer). And I am sure there are tons more.

So, my plan is to keep running…until my doctor says I need to stop.

I will run as fast as my lungs will let me!