THANK YOU to everyone who read my last blog post and for commenting, via on my personal Facebook page, my blog Facebook page or on here. It truly was a moment from the race, and from our whole trip for that matter, that I will never forget. Ever.

For once, both my husband and I crawled into bed early the night before the race…about 9:30 p.m. I was shocked that we were heading to bed so early, until I realized that it was actually 11:30 p.m. our time! Oh well, we tried. I slept pretty good for the first half of the night and then for some reason, I was wide awake at 3 a.m. – YES, 3 o’clock in the morning! Around 4 a.m., I fell back asleep and slept on and off until my alarm went off at 6 a.m. Even though I had a somewhat restless night, I felt pretty good – actually rested.

After we grabbed a small bite to eat – bread and peanut butter for me – we finished getting ready and decided it was time to head down to the start of the race. The weather was gorgeous – a little chilly (low 50s) – but sunny and very little wind. I was very happy about that because I knew the forecast called for low-to-mid 80s by noon or so. I knew it would quickly warm up. We didn’t really know where we were going went we left our hotel, but it was very easy to figure out – we just followed the hundreds of runners all heading in the same direction! The start of the race was less than six blocks from our hotel. Awesome! 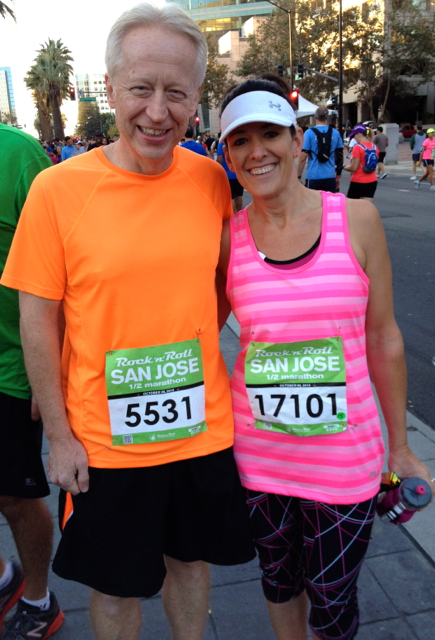 I took a picture once I got in line. Yes, there were tons of people and the picture just doesn’t do it justice. The start of the race, and at least the first three corrals, were around the corner from where I started. But this picture can kind of give you an idea. Apparently, there were more than 10,000 runners in the Rock ‘n’ Roll San Jose Half-Marathon! 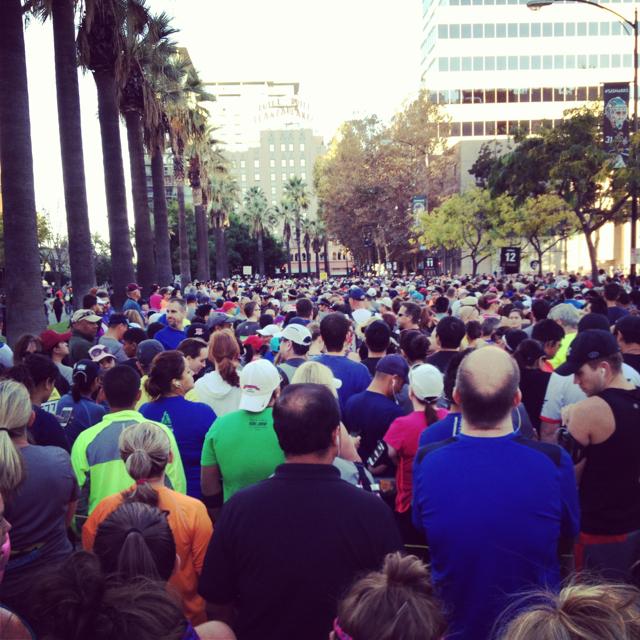 Here is a picture of the start of the race from the professional photographers, Marathonfoto, who captured some great images of the race. 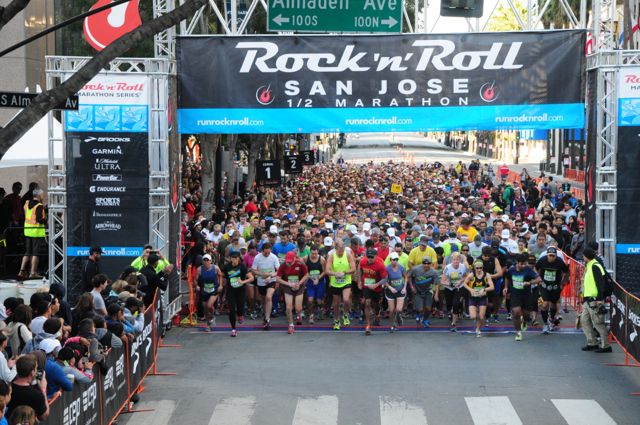 And here are a couple of pics of us running, also taken by Marathonfoto. Side note: I will admit that I tried to pay attention to where the professional photographers were throughout the race because I knew I wanted to get some good shots because I had every intention of purchasing the photos. I know that may sound egotistical or whatever, but I’m kind of a picture freak. Just ask anyone who knows me! Anyway, here are some photos of us running: 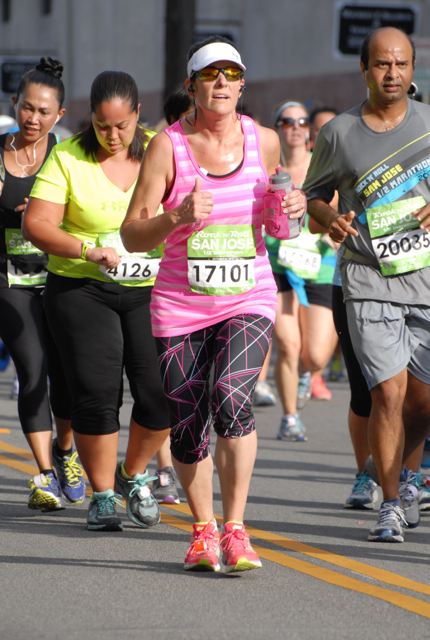 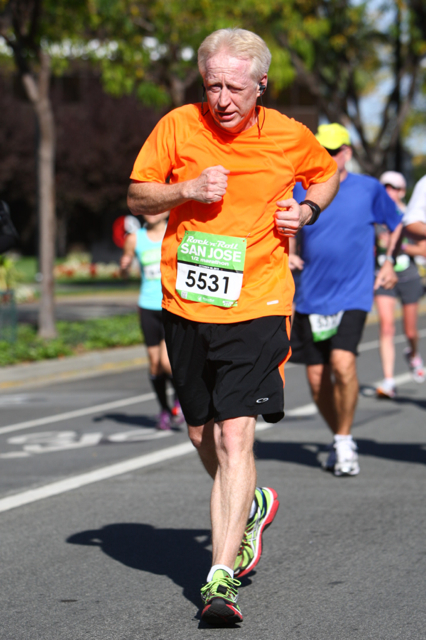 The course of this race was pretty flat, except for two times we had to run under overpasses – if that made sense! We ran down and then had to run UP! One of them was quite steep and somewhat of a long climb. The second underpass was right toward the end. I didn’t have a lot of juice let, but as I usually do when trying to run up a hill, I just started chugging my arms and repeating over and over and over again, “I think I can. I think I can. I think I can.” Yes, when I run/climb hills, I pretend I am “The Little Engine That Could.” It helps. I also stare straight down at my feet until I think I have made it to the top.

Something different I did this race that I didn’t do during our first half-marathon was bring my water bottle filled with an electrolyte, hydration drink with me. I opted for Nuun, as this is what I used while training. I found out that I could stomach the watermelon flavor, which floored me because I really don’t like any “fake” fruity flavors of any type of drinks, whether something plain as Crystal Light or more sports drink-like like Gatorade, Powerade or Propel. But, the Nuun watermelon drink worked great. I also brought along two Gu energy gels that I planned on consuming during mile 5 and mile 10. My beverage and energy gels worked perfectly. However, I was thankful for the water and Gatorade stops as I had to fill my water bottle up a couple of times toward the end. I was very thankful that my stomach didn’t get too wonky during the race, it typically does when I am running a race. (My nerves always get the best of me!) But this time, my typical rumbly tummy may have prevented by downing a couple of tablespoons of Pepto on Saturday morning and on Sunday morning!

Despite being kind of tired and maybe just a little delirious toward the end, I felt pretty good for most of the race. The only problem I had was around mile 11 or 12. Now, this may sound a little odd, but it literally felt like my uterus was going to fall out. Or my pelvic fall had shifted or something. It’s really hard to describe other than saying it felt like my uterus was going to fall out. It was pressure on my bladder or anything like that. I don’t know. It was weird. Any of my female running readers ever have this problem? I would love for you to share. After I finished and I sat down for a little while, it felt much better. And then it didn’t bother me the rest of the day or the rest of the trip for that matter. It was the strangest feeling to say the least!

Overall, I was pleased with everything about the race – my pace, how I felt, my nutrition before, during and after, my time, which by the way, I shaved nearly 20 minutes off my first half-marathon time! Woot-Woot!

Here’s a couple of more pics for your viewing pleasure…the first is me crossing the finish line and the second is my hubby and I right after we were done. I am so happy for us and proud of us for accomplishing our second half-marathon. Oh, and to let everyone know, neither Al nor I ever plan on completing a full marathon. It’s just not something either of us are interested in. Not sure why! My next goal is to complete two half-marathons in one year! 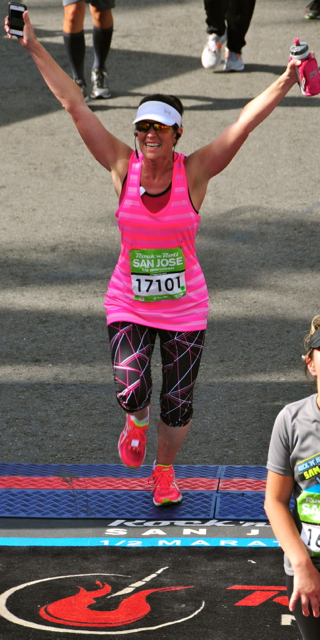 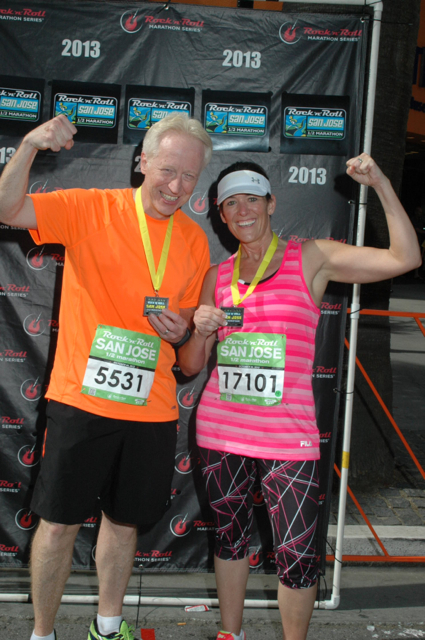 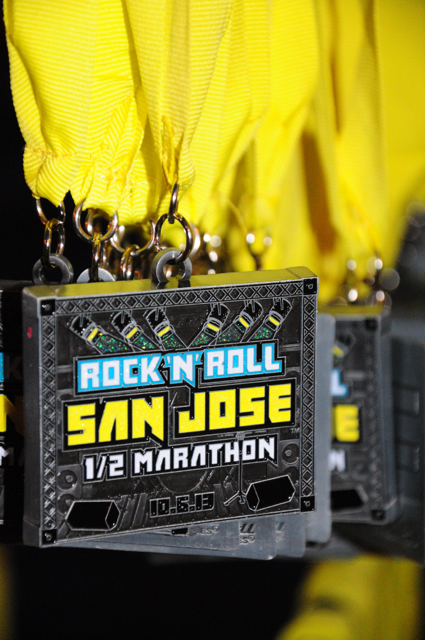 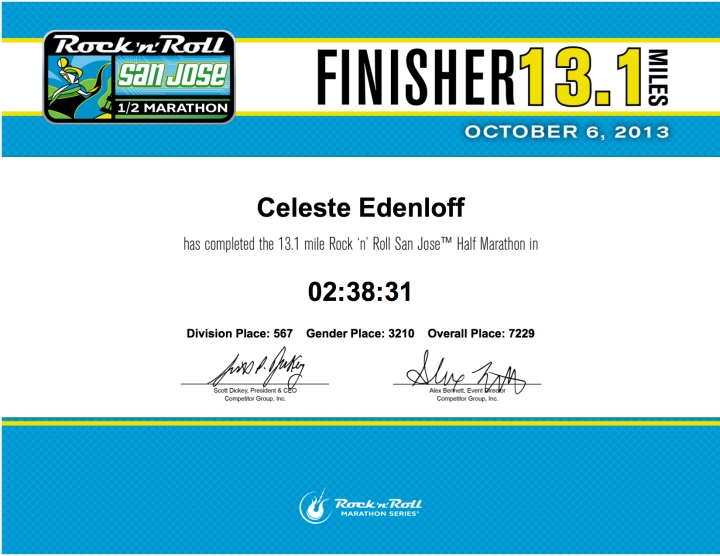 Stayed tuned this week for another post about our trip! And thanks again for taking the time to read my blog. You all are so appreciated!

8 thoughts on “More about the race!”